I've been busy with my EIR recently and I'm pleased to say that I'm getting close to that magic 1,000pt milestone. Just a few more figures, plus some shields (LBMS) and lots of basing to do. The movement trays are done too. Maybe another week to 10 days and I'll be there. Must remember not to rush the last few figures! As soon as they're ready I'll post a selection of pics for your enjoyment.

The parcel force man has been kept busy lately, new cameras, etc. Plus he's also delivered my three boxes (yes 90 figures!) of Warlord Ancient British models. They're the standard celt boxed set with a selection of metal add-ons for limed hair 'heads', battersea shields, etc and it includes a leader type replete with waterloo style hemlet. Interestingly I have a few sheets of the woad rub-on transfers. These have now been withdrawn as they have proved to be very hard to apply properly. I'll give them a try but if they are a bother then I'll just use them as a reference. They certainly look great.

The British boxes were supposed to be accompanied by a free pack of Druids but they were missing. Warlord Games were very quick to put matters right so a big thumbs up to them. They sent the figures first class, next day, with a extra freebie Celt standard bearer by way of an apology. All this Celtic-ness means that I now have more than 170 of the little blighters awaiting their turn at my painting table. Best get dipping eh?

I've also received a free box of Wargames Factory Late Republican Romans (Caesar's Legions), 48 plastic models in total. I won a box set in the Field of Glory(tm) competition ages ago. Some of you may have seen the less than rave review the figures got in a recent Wargames Illustrated article. Well ... I have to be honest and say that they're not exactly the most detailed of figures, in fact they rather reminded me of the old GW 'drastik plastik' Orcs from the mid-80's - remember those eh!? However, they were free and with a tidy, basic paint job they'll probably look ok. Only require another box to make at least 1,500pts. My Gallic Celts would make the perfect allies to bring the force up to 2,000+pts. I may even dip them ... oh yet another army!

My daughters have been painting more figures, Romans this time. Here's a picture. 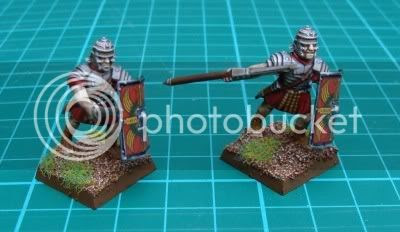 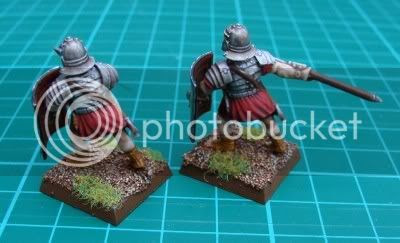 Daddy applied the water-slide shield transfers. Doing that transported me momentarily back to the days of airfix kits. Luckily with these figures there was no possibility of getting a big gluey thumb print stuck on the canopy. A few more and we'll have enough for a small skirmish game.

First post of the New Year ... so here's to a very happy one for all!

Well the recent hols were something of a gaming disaster with absolutely nothing getting done whatsoever. Best not dwelt upon really as it was not exactly a good time - oh well.

I have managed to get painting again recently and my next unit of 15 Legion are coming along very well. If I really push myself then I should get them complete in about 2-3 weeks. Then I'll have a full 1,000pts of EIR, plus some hairy barbarian support in the form of skirmishers and war hounds. These figures will then go on to form the start of my Ancient British horde. I ordered the 3 box offer from Warlord back in December but the delivery was delayed. Should get them by the end of the month.

I would have posted some pics of my most recently completed batch of EIR but my digital camera has finally given up. It was nearly 7 years old (an Olympus C40Z, one of the first ever 4MP cameras!) so didn't really owe me anything, pity though as it used to take such good pictures - especially of toy soldiers. After much research, I have ordered a Sony cybershot H series. Ooh new toys!

I've also ordered a pack of the 'Rank and File' range of EIR from Crusader Miniatures. I like the plastic Warlord figures but they are just a bit too small compared to my Black Tree figures. Hopefully the Crusader mini's will be a little larger. Will post pics ... when I have another camera!