Thought it was about time I posted a few photos of the models I've been painting as part of The Big Push. Some of them are still work in progress photos but with the nights drawing in I probably will not get a chance to take pictures until next weekend.

Here's the Late War BEF that I'm currently working on. An NCO and 3 Privates. 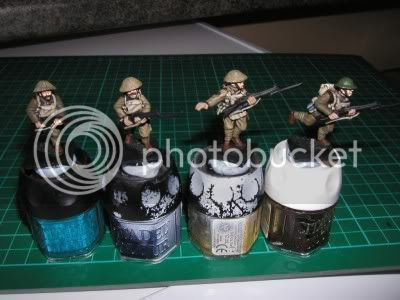 A close up of the NCO and a Private. I'll post up more pics of them when they're completed along with some notes of the paints used, etc. 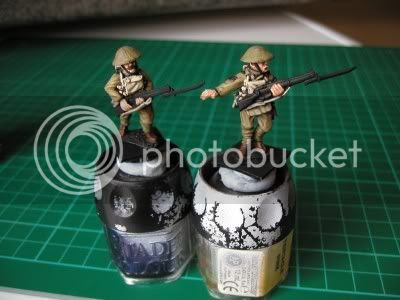 Here's some of the EIR, still awaiting bases and shields :-) 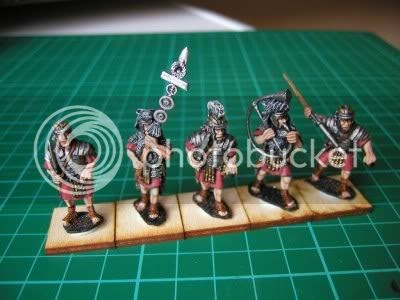 A British Celt warhound packmaster and his four legged friends. 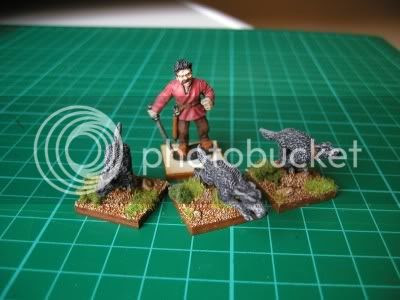 The WW1 figures are Great War Miniatures. The Romans and Celt are Black Tree Designs. The warhounds are from Gripping Beast.
Posted by Matt at 16:35 1 comment:

Well, it might be "day 17" but there's been a good bit of progress. Finished 7 EIR and a Celt last night! When I say finished they still need basing, plus shields, but the painting is done. The shield transfers are on their way from LBMS.

The other good thing is that I really seem to have got back in to painting models again. I've really enjoyed this recent batch of figures and am quite pleased with the results. Once the shields and bases are done that will give me about 800pts of EIR and Auxiliaries. I really must try to get some pictures posted!

Not sure what I'll paint next ... might get a few BEF done, but then again I'm quite keen to push on to complete 1,000pts of EIR.

Happy Painting.
Posted by Matt at 07:46 No comments:

Ok ... the Big Push has stumbled a bit in the last few days but this has mainly been due to the fact that our local library finally got hold of the BBC's Spooks series 6. We missed this series as we were living in NZ when it was screened in the UK. Library rules only allow you to hire DVDs for a week, so 10 episodes in 7 nights ... no problem ... and next to no painting either. To be fair the shows were absolutely excellent, top notch entertainment, so the lack of painting is no problem for me. Can't wait for series 7, which is due to be screened in Oct/Nov. Brilliant!!!

Anyway, from looking at other blogs it seems the vogue now to consider what's on the wargaming agenda for 2009, even though it's only mid-October, so here's my current thoughts...

Romans
Aim to get a 1,500pt army completed as soon as possible. If Wargames Factory bring out their EIR range, and if they are good, then the target may become 2000pts.

Celts
A 1,000pt starter army would be fine. A mix of Warlord and Wargames Factory models, with a few BTD thrown in for good measure. Also, I’ll probably dip these figures since I just want a reasonable looking army to play smaller games of WAB with.

The Great War
I’m really hooked on these rules even though I’ve never played a game. The figures are brilliant, either from Great War Miniatures or Renegade. The history is truly fascinating too, and quite moving at times. The wealth of information available about World War One makes the history quite accessible. Additionally, we’re planning a visit to the Somme later this month so that’s bound to boost my enthusiasm further. This conflict absolutely changed the face of warfare. It brought about a truly staggering amount of technological innovation, along with strategic and tactical progress. It's definitely not just about the trenches of the Western Front. Well worth reading about.

Napoleonics
I’ve been interested in Naps since the mid 90’s and even purchased a army deal (from Foundry – ouch!), only to sell it a year later because nothing had been painted. My friend Jimbo is a very keen Naps enthusiast too. So we’re both quite interested in the forthcoming Victrix range which would make big battalion games quite affordable. The real bug bear here is the painting … both Jimbo and I struggle with Napoleonic figures so our ‘new’ plan is to try out dipping. We realize that the individual figure quality will not be great but it’s the only way we’ll get 100’s of very similarly uniformed troops on the table before we reach retirement. Hopefully the dipping process will give the troops a good ‘campaign’ look rather than a bunch of parade ground dandies.

Scenery
Naturally, all these games, figures, etc will inspire me to produce more scenery. The EIR and Celts will require Roman style buildings and fortifications, along with thatched roundhouse farmsteads, etc. The Great War will need quite a bit of specialist scenery which I’m really looking forward to building. As for the Napoleonics, I will no doubt require a few more Peninsular style buildings. Add to all this things like scenic movement trays, counters for things like ‘stubborn’, etc. I know that many companies make good scenery but the cost (and my limited budget) mean that I'll have to make most things from scratch using cheap materials.

Should keep me busy eh?

The attack began well with some good initial gains, mainly with black paint for tidying edges, etc. But then the economic crisis took priority and the finance committee called an impromptu meeting to discuss important real-world things like investments, pensions, etc. We usually do this sort of thing every few months but the current situation demands closer attention I'm told, hence we've been checking things weekly. I suggested opening an account with www.mattress-bank.com but that was outvoted.

On a brighter note - those splendid chaps on the WAB forum have got some good suggestions for those struggling to find the motivation to paint. Have a look here. (That means you too Jimbo!?)

Sound the rally and let's give the Hun a jolly good thrashing eh what!?
Posted by Matt at 12:46 No comments:

Alas, days 5 and 6 of the campaign (Sunday and Monday) have seen very little progress. The reasons are many and varied and if listed will probably look like a list of excuses. To be fair Mondays are not a good day for painting toys due to other more important committments.

Day 7 has started with dreadful weather but that's hardly dampened the morale of the men. Plan for tonight is to get the EIR tunics done and tidy the edges with a bit of black. I try to paint as neatly as possible but inevitably I have to do some tidying. I think it makes quite a difference and helps to properly delineate the areas of the model. I'm having second thoughts about trying to paint 8 models at once. I normally only work on 4 at a time.

My new PC will not prove to be a distraction for a while as the first one is going back to Mr Dell as the case is cracked. A new one will be delivered in about 2 weeks - plenty of time to get the latest batch of figures complete. Their customer service has been excellent so far.

Day 3 saw the troops discover an enemy supply dump stocked with large quantities of Cider. Whilst much fun was had by all it certainly slowed things up a bit

Day 4 started with some small gains but during the evening the troops were distracted by a troupe of exotic dancers (BBC1's "Strictly Come Dancing" to be precise) so things ground to halt.

New orders from HQ should see the advance back on track for day 5.

The Big Push has got off to a good start. At 7:30pm on Oct 1st the Royal Artillery ceased fire, trench ladders were readied and the whistle was blown. Our brave hero scrambled over the top and immediately engaged ... a small group of Romans and a Celt.

Had a good session last night. I'm working on 7 Early Imperial Romans (EIR) and a Celt. The EIR will finish off my first cohort of 15 figures, whilst the Celt will become the second pack master leading a group of warhounds. The armour is complete, the caligae (sandals) painted and the base coat of the skin colour is finished.

No pics though as indoor lighting is not suited to miniature photography. If the weather if fine at the weekend (forecast is heavy rain) then I'll try to take a few pics.

Just need to sustain the momentum now!
Posted by Matt at 07:30 No comments:

It's been quite a while since my last post and the reason is that it's been ages since I did anything interesting in terms of gaming. Moving house, new job, etc does rather get in the way of gaming!

However, my brushes have been idle too long! I have decided to start October with "The Big Push" to get some models painted. Why call it the big push? Well, we have a 3 day visit to the Somme planned for the end of the month so somehow the name seemed appropriate. This doesn't mean I'll be painting some of my very modest collection of WW1 models. Instead, I plan to make some good progress with my EIR and Celts. I only need to complete a handful of figures (mainly Legion) to get 500pts ready and only a few more Legionaries and Celts to have nearer 1,000pts completed.

I aim to report progress here every few days. Wish me luck!