Crumbs! I've won a box of miniatures playing the "Win the Field of Glory" game.

So here's what I chose 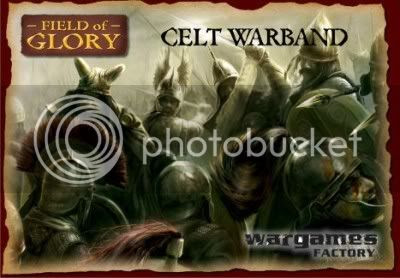 According to the boss at WGF they are 28mm foot to eye. Brilliant!

I suggest everyone gives the game a whirl.

Last of the Auxiliaries now painted!

The last unit of Auxiliaries are now painted, hurrah! Just for a change I painted most of the tunics in a white linen colour rather than the red of the other spear & shield armed unit. It's Wargames Foundry Boneyard shade/mid/light. The rest of the figures are painted as described earlier on this blog.

Here's a couple of shots. 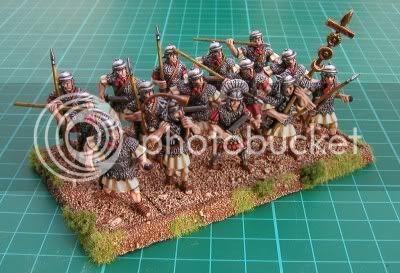 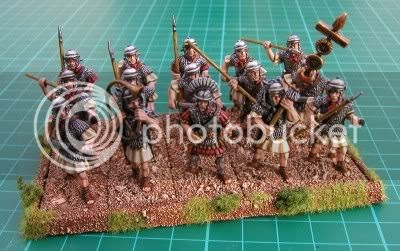 As with the other unit they are shield-less. The shields are painted and ready for the LBM transfers - I'll have a big shield making session at some point.

All BTD figures, their 35% sale is about to end and if you sign up as a customer before the 30th then you get an extra £5 discount, good eh!? I've just ordered a few Celt villagers for use in skirmish games, a few more legionaries to top up the units and a Legate/Tribune/Aquilifer command pack. Anyway, the unit leader here is in fact a figure from the Legionary command group, but I wanted each unit to have a different leader.

Work has already started on the Legionaries!

Happy painting.
Posted by Matt at 05:14 No comments:

Thoughts on "Blackpowder" from Warlord

Warlord games have released some notes about their forthcoming 1700-1900 era rules "Blackpowder".

My initial reaction (before reading the article) was "Hooray!" since I'm planning to slowly build a decent Napoleonic French force to fight against Jimbo's redcoats. He's looked at number of rulesets but has not been inspired. To keep things simple we discussed the idea of using the Napoleonic variant of those well known Warhammer rules. Whilst I think that it would give a perfectly playable game, I'm not sure it would truly capture the 'feel' of the horse & musket era. In particular, the difficulties encountered by commanders trying to direct troops on a confusing, smoke shrouded battlefield, i.e. the fog of war. So ... seeing these rules advertised as being written for the horse & musket era and by such respected persona as Rick Priestley and Jervis Johnson, I was jolly excited!

However, my excitement was soon tempered by the article stating that the rules were tailored for their gaming environment, namely a large collection of figures and large tables. Units of 30 for infantry and 15 for cavalry. Hmmm? Our initial forces will be modest at best and the table will probably be the average 6'x4'.

Continued reading revealed that the rules (in part at least) owe something to the Warmaster set, particularly the movement rules. I've never played Warmaster but having read the rules I was impressed with them, e.g. the command and control aspect for moving units and/or brigades of units. This I felt was encouraging news!

Further on I note that casualties are not removed, instead units accrue markers to reflect their battle-worthiness. This idea I like because it means that all your hard work (painting and modelling) stays on the table for much of the game. Markers needn't be bits of paper, they can easily be nicely modelled mini-vignettes. Fun to paint and look great on the table.

Not much information about how shooting and combat work, but the morale system allows for units that have taken a pounding to become 'shaken' whereupon their fighting and shooting ability is reduced and their likelihood of running is increased. Additionally they cannot engage the enemy in combat. This all seems fairly sensible.

So my earlier worries about the possible necessary size of the game and units have been somewhat assuaged. Move distances can be scaled for all troops easily enough, as can unit sizes.

Additionally, the rules are not aimed at highly competitive play. Good I say! I prefer to play toy soldiers in a spirit of gentlemanly co-operation. Of course the rules still need to be worded well to avoid in-game confusion. But my view is that if people like Rick, Jervis, Dave Andrews, the Perry's play this game regularly and enjoy it then it has to be worth trying out.

Here's a shot of the new Wargames Foundry Celts, the original may be found on their web site! 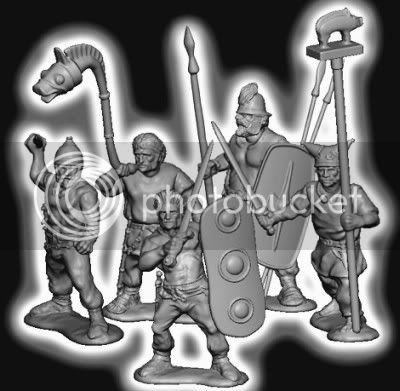 These are so good! Cannot wait until I can start building and painting some of these.
Posted by Matt at 22:15 No comments:

A Skirmish from the Peninsular War

I've been meaning to arrange a game of Napoleonic Skirmish with my good friend Rich for some time. Now that my peninsular style buildings are finally ready it was time to grab a musket and give the French a good thrashing.

The rules are based on the excellent GW Strategy Battle Game rules, which provide an exciting and dynamic skirmish game without the need for too many extraneous details or continuous reference to the rules. We played 3 games during the day, with Rich (the 'Colonel' as he's known) taking command of the British in all of the games.

The first was simply a clash of patrols with a small group of French stumbling upon some of the men of the South Essex light company resting in an abandoned farm house. This gave Rich a good introduction to the rules, which he picked up very quickly. The result was a decisive victory for Wellington's men.

The second game was more elaborate...

Major Ross is keen to establish cordial relations with the new local guerilla commander, known as 'El Carnichero' or 'The Butcher'. In order to gain their trust, Ross has ordered Sharpe to arrange a meeting to deliver valuable supplies and a generous payment in gold sovereigns. The guerillas have agreed to meet with the British at a remote farm 20 miles north of the fortress town of Badajoz. Sharpe and a few chosen men wait with El Carnichero whilst one of his men, Luis, goes with Lt Price to fetch the supplies. However, the French have their own spies in the hills too. They seize the opportunity to capture a prestigious British officer and a notorious guerilla leader before the rest of the small British force returns.

The French attacked directly towards the farm where Sharpe, his rifles and El Carnichero were waiting. Initially the advance went well as the farm's outbuildings and the light woods afforded the French excellent cover. However, as they reached the open courtyard the rifles proved deadly. As the French reached the farm Lt Price and Sgt Harper arrived with the reinforcements and wasted no time in getting stuck in. The battle became very close and was decided only after a one-on-one combat between Major Sharpe and Capitaine Dubreton of the 27th's Voltigeur Company. Sharpe's heavy cavalry sword proved no match for Dubreton's sabre and with their officer defeated the remaining French surrendered.

The third game was a rather impromptu affair using all the painted models on both sides. We agreed to fight to the last man. The British formed a barricade across the table using hedges, barrels, crates, etc. The French dshed across open ground to get to grips with their foe. Amazingly the rifles hardly hit anything until the French line reached the barricades when the green jackets spectacularly made up for several turns of dreadful shooting by cutting down a swathe through the French. Undeterred, the Emperor's finest carried on the attack and began to slaughter the British. The fighting was bloody and came down to two riflemen facing one voltigeur on the balcony of a small building. The voltigeur fought bravely but two determined riflemen were to have the best of it and quickly despatched the Frenchman.

So, three wins to the British and what fantastic games they were too. I thoroughly enjoyed myself as did Rich (along with his son James). I hope it inspires them to organise some games with their 20mm plastic figures. Speaking of which I really need to sort out some painting sessions to show them both how wield a brush.

Anyway, enough waffle. Here's a few pics from the day.

The British take up good firing positions as the French are sighted. 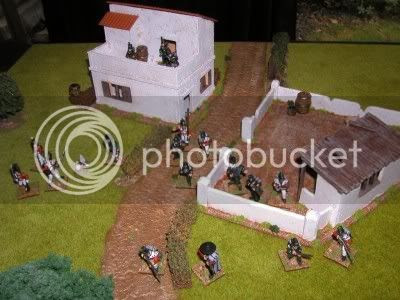 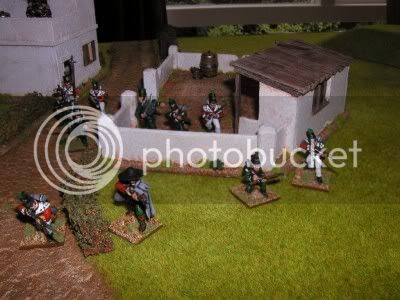 Another view of the Spanish style buildings. 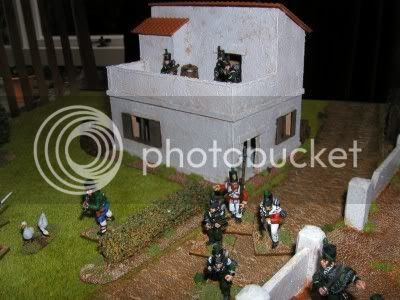 Note the ladder, it was used during the game to allow the riflemen to escape when the French took the downstairs area. 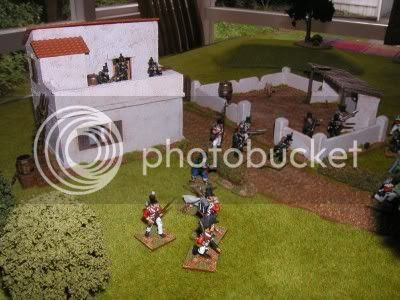 A shot of the whole table. The French begin their advance on the farm. 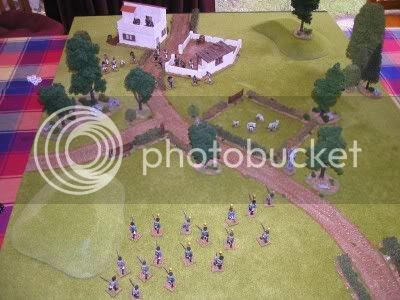 The figures are mostly Front Rank with a few Wargames Foundry. All painted using GW acrylics.
Posted by Matt at 01:20 1 comment: