It's been a while since I did any significant painting as I've been fairly preoccupied with re-furbishing our somewhat dilapidated bathroom. However, that's complete enough to be useable (only the tiling and some sealing to go) and the holiday season is almost upon us so I'm trying to find the time to get painting once again.

Exactly how much painting I'll get done, given that our Christmas schedule is looking rather busy, I do not know. I suppose I should just keep my paints and figures handy and try to grab the odd half hour whenever I can. I reckon that painting whilst partying with friends might be considered rude ... particularly if it's at their house ;-)

I'm looking at finishing off the last few Romans for the first unit of my Early Imperial Roman army, a unit of 12 Auxilary Archers. Fairly easy to paint so good for getting back in to practice. After that I'll continue with the Bretonnian Questing Knights that I started ages back. Need to get that unit finished in time for the Warclouds over Woolston doubles event in early February. Thinking of entering alongside my good lady wife as she has a (fully painted) Dwarf army. I think the armies would make a good combo ... solid infantry, good artillery, extra dispel dice allied with some of the best cavalry available in the Warhammer World. The event requires each player to provide 1,200pts of troops so in effect it's a 2.4k game. The points limit per army means that there'll be no 'Lord' level characters so hopefully rather less 'herohammer' and more 'warhammer'.

Bought some more Foundry paints yesterday! Couldn't resist after seeing the email flyer showing many packs reduced to just a fiver. That puts it on a price par with GW paint which only comes in 12ml pots instead of 20ml, plus GW paint generally isn't as good. To save a few sheckles on postage it's being sent to Grandma as she's due to visit in January. She's also bringing out the rest of my Black Tree Design Romans and Celts. Should have almost 1,000pts of troops by then.

What with starting to plan our visit to the UK and France (Normandy) next year I've found myself drawn once again in to researching a bit more about WWII. Of course this has meant that I've been thinking about how I'd possibly like to play WWII wargames ... oh dear more figures for the lead mountain! Luckily my wife applied several sharp blows to the side of my head and I quickly saw (her) sense ... ? It would have to be 28mm scale skirmish as I don't enjoy painting any other scales. Tried Flames of War (15mm) last year but those tiny figures "did my head in". Also, no-one round here plays 28mm WWII, I have no proper rules so must either buy them or write my own, nor do I have much scenery suitable for WWII other than trees, hills and woods. So apart from no figures, no opponents, no rules and no specific scenery ... hmmm.

Really I need to stick to finishing off my WFB Bretonnians and then getting on with my WAB Romans ... so that's the plan!
Posted by Matt at 09:24 No comments:

Another Sunday morning and off to Christchurch Wargaming Club for a game against Mike's Orc & Goblin horde. Now the last time I played against Mike's greenskins (ages ago now) it was a total disaster for the Bretonnians. Mike had first turn and his bolt throwers tore in to two units of knights who both fled off the table taking my General, BSB, wizard with them - about 900+ points in total. So things were decided by the end of turn 3.

Determined that I would be victorious this time (or at least do rather better) I had the following list.

Not too much in the way of magic items as I tend to forget to use them.

No black orcs, boar riders or trolls was a surprise. By the way ... Mike's army is largely made up of wonderful old GW figures from the Kev Adams 80's and early 90's. Some of my favourite old figures!

The game began well for the Orcs & Goblins. Fairly few animosity problems and the stone throwers (apart from the very first turn) did extremely well, punishing my knights as they were held up by fanatics. By the end of turn 3 I was feeling quite demoralised. Every dice roll seemed to go against me and Mike just couldn't put a foot wrong. Being a decent sort of chap he seemed a bit embarrassed about it all.

Determined to give the Orcs a bloody nose before they slaughtered what remained of my army I soldiered on. The next three turns were absolutely crazy with the game swinging back and forth in favour of one army then the other with amazing rapidity. It became quite stressful actually!

In the end I scored a victory but I must admit that it was nothing to do with tactical skill. It was all due to crazy dice rolls on both sides of the table. Still ... I suppose we all have these odd sort of games occasionally.

A good point from this game was that I actually managed to use my Pegasus Knights correctly. They began by taking out the stone throwers in turn 3, then helped out with combats later on. Still made a hash of my light cavalry and dithered too long with my heavy cavalry in the face of goblin fanatics.

One sunny Sunday morning I trolled along to the Christchurch Wargames Club at Woolston to play Ray and his Chaos Dwarf horde. The game was a 2,000pt Pitched Battle and for some reason I was feeling quite confident. Possibly as a result of my WAB game against Darren's Saxons?

I was really looking forward to the game. Ray's a nice guy and in spite of being here for more than 2 years it was my first game against him. It was also my first game against Chaos Dwarfs since the mid 90's. I'd seen Ray's army on previous visits to the club and it looks great! A nice mix of old GW and other manufacturers, nicely painted and with some fantastic conversions.

Anyway, you might notice it's taken a while to get around to posting about this game ... possibly because my trusty Bretonnians got a complete and utter drubbing!

I won't go in to too much detail about what happened but suffice to say that my cavalry attack was completely stalled by the Earth Shaker cannon parked on Ray's left flank. His solid infantry arrayed around it to ensure that no enemy could get near it. So, with most of my cavalry moving no faster than most infantry, my attack became disorganised, some pursuits left my units in very awkward positions, etc, etc. Very few Chaos Dwarfs fell to my lances or bows and by the end of six turns they had scored a massive victory.

Whilst it was a bit embarrassing, the game was a good laugh and provided me with much to think about. Primarily, that I should try not to play like a complete wally!

Composition
- Take some flyers such as Pegasus Knights. They would probably have tackled his artillery on turn 2 or 3.
- Don't bother with too many bowmen (Str 3 longbow) against a Toughness 4 army with lots of armour.

Deployment
- Don't bunch up the cavalry attack if facing an Earth Shaker, spread potential targets across the battle front.

Tactics
- Use my light cavalry more effectively to stop similar enemy units distracting the heavy cavalry.
- Ensure the main assault on enemy lines is done in a concerted fashion.

Here's a few pics of figures from my Bretonnian Army. 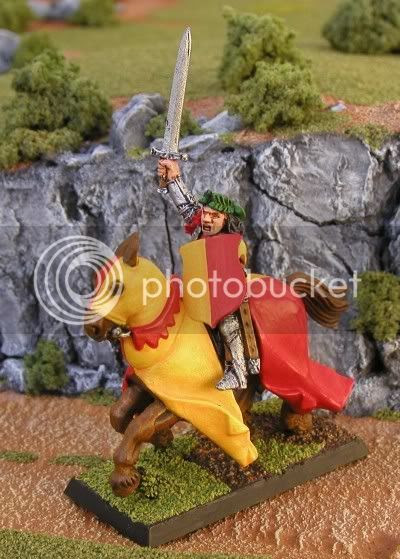 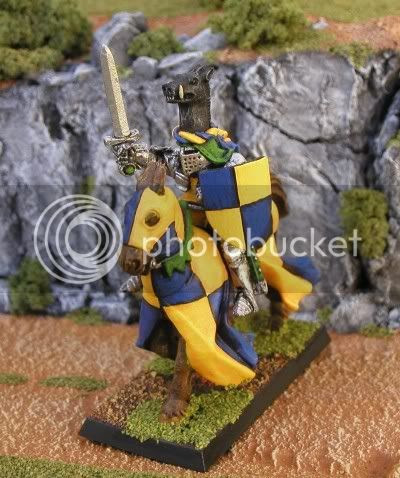 Knight of the Realm Champion 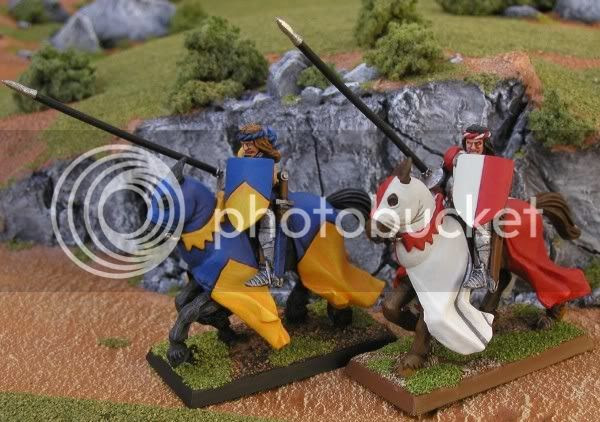 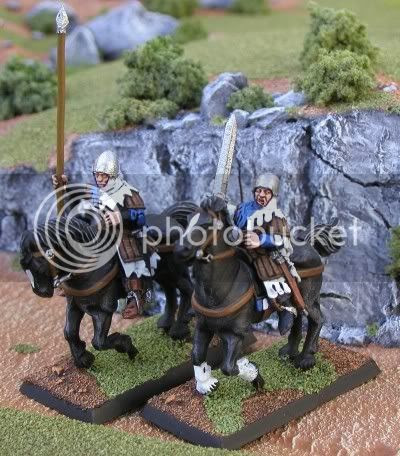 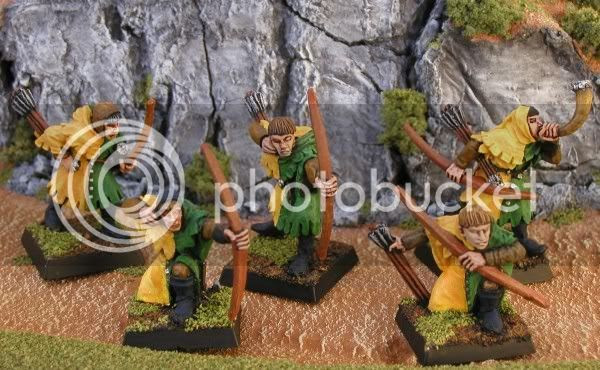 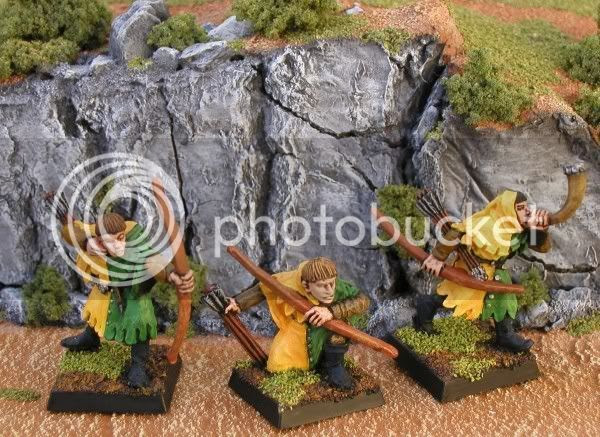 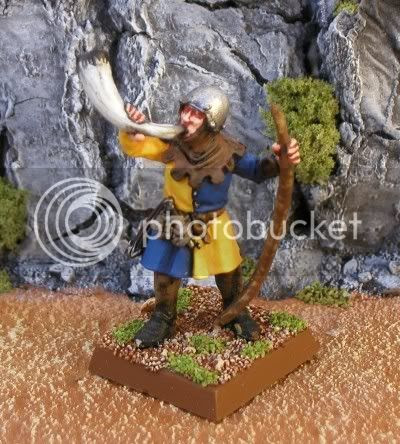 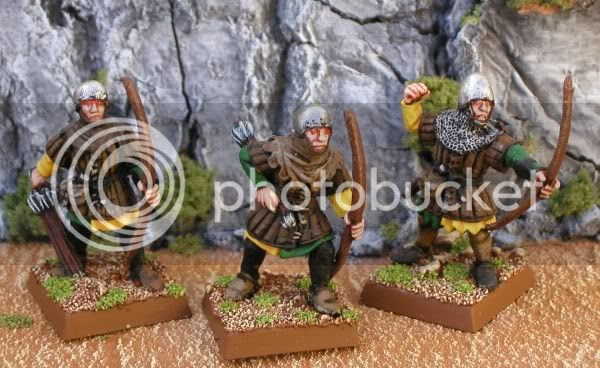 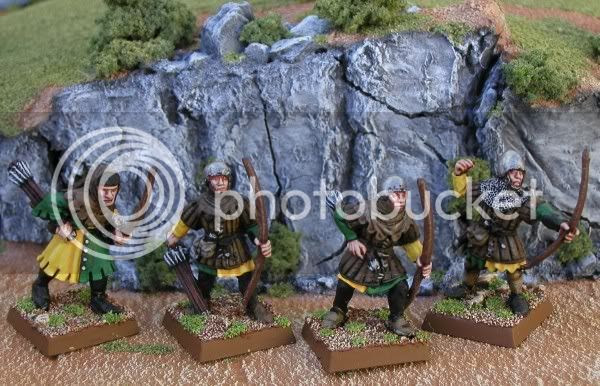 Skirmishing Bowmen
Posted by Matt at 02:03 No comments:

Here's some pics of my (not so) recently completed Romans. My first attempt at the Foundry 3 colour system and I'm quite pleased with the results.

The figures are all Black Tree Design. 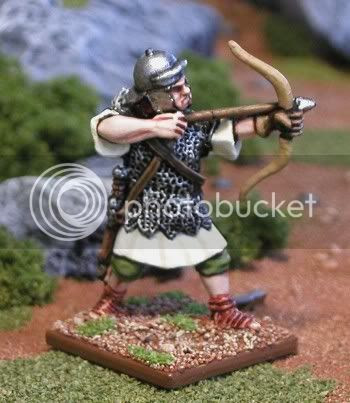 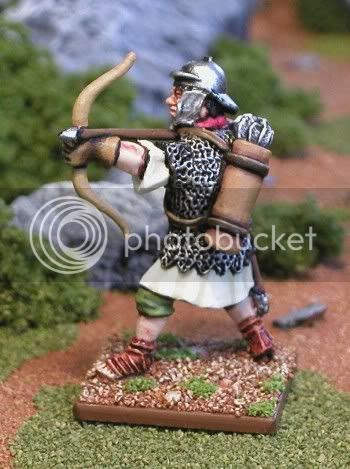 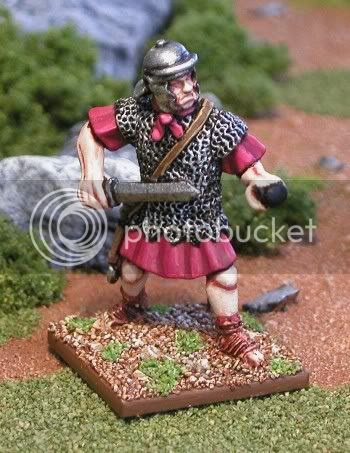 Auxiliary Soldier (front) The shield will be painted when I have some suitable transfers. 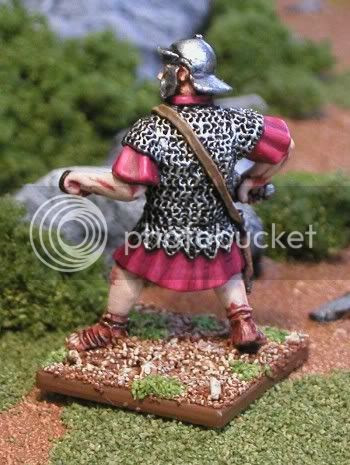 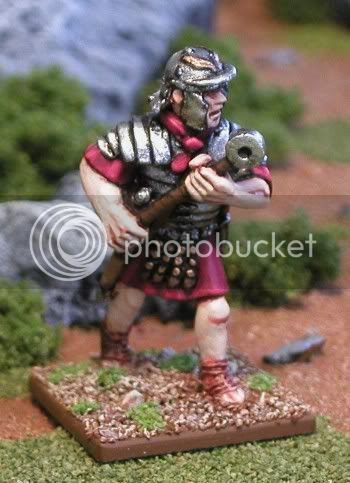 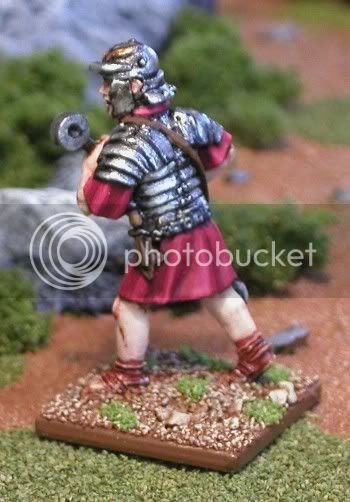 Legionary Ballista Crewman (front)
Posted by Matt at 02:01 No comments:

Here's a few pics of some of the figures in my collection painted during the last few years. Enjoy!

(sorry if some are too wide for the blog)

I occasionally play some Napoleonic Skirmish, so here's some of the figures. 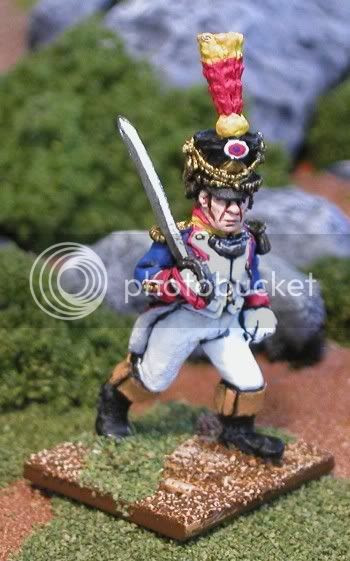 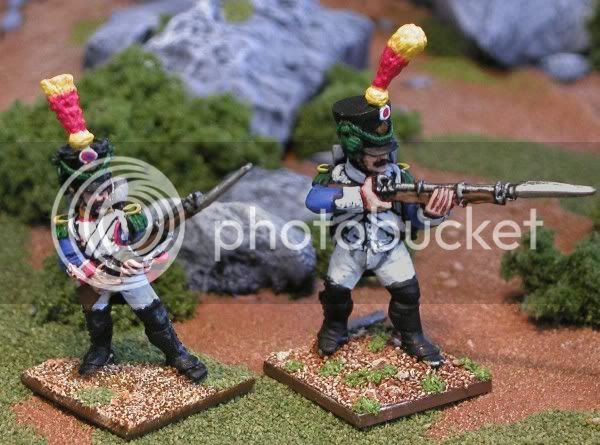 Foundry and Front Rank Voltigeurs. The figure on the right has yet to be finished (e.g. cuffs and collars) but is good enough to put on the tabletop for now.

I'm a big fan of Lord of the Rings - the book, the films and of course the miniatures. 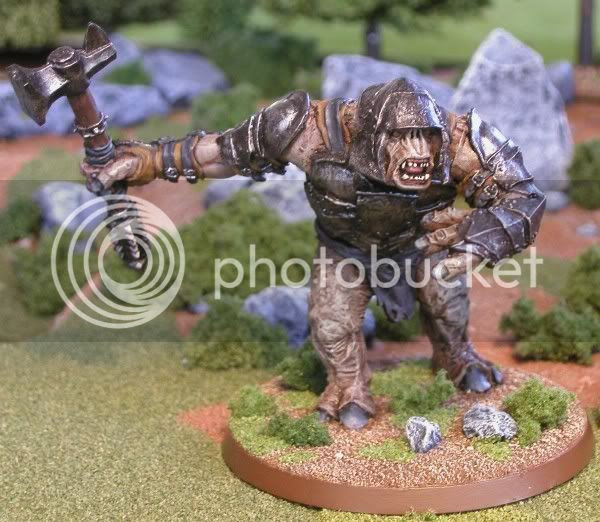 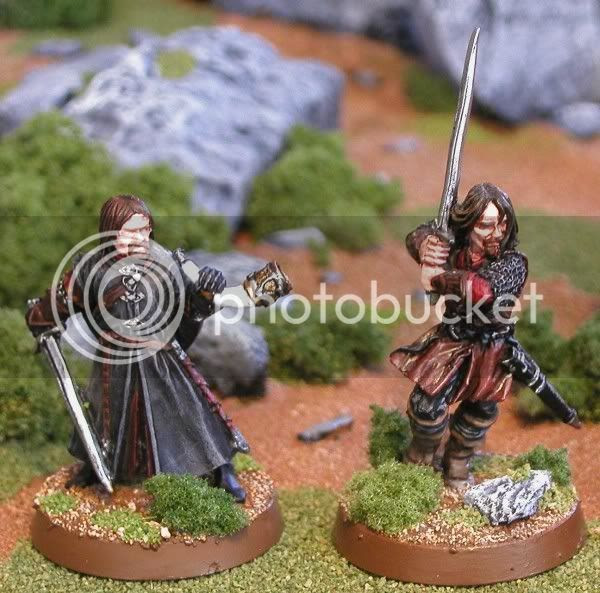 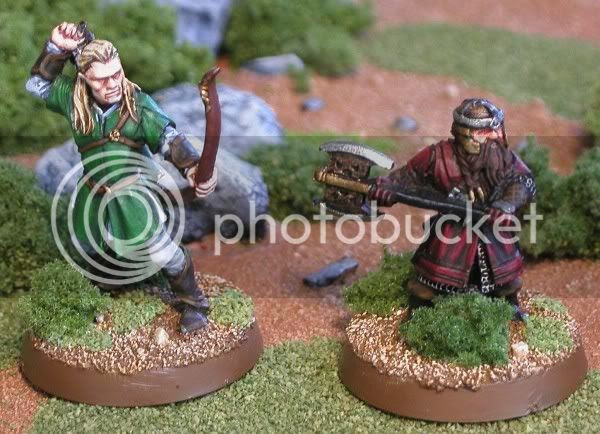 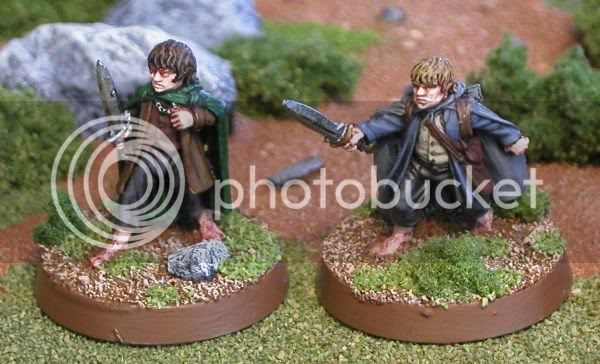 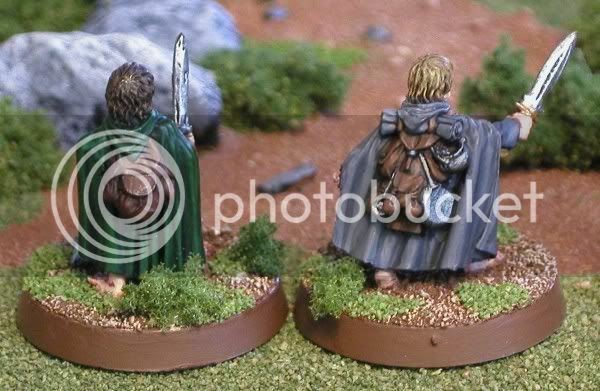 Frodo and Sam - quite pleased with those cloaks. 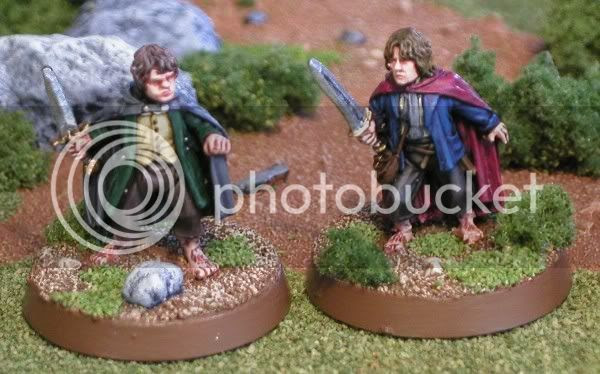 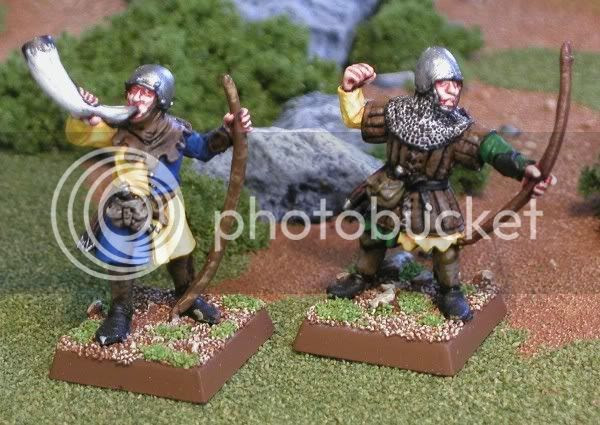 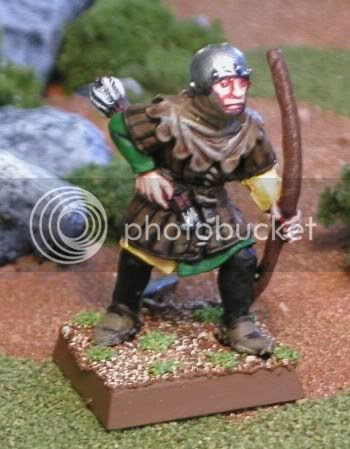 My good friend Jimbo (a.k.a. "The Iron Duke") has turned 40. To celebrate this historic moment I painted up some Wargames Foundry British officers to make a "command token" for his army. 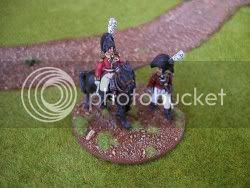 I'm guessing that most rulesets will require a group of figures to represent the General, his staff, etc. Hopefully this will serve as a springboard for Jim's Peninsular British army! Get some Foundry paints and get painting those redcoats mate!

Since I do not do that much painting I've decided to combine my gaming and painting blog in to one blog. It's just more manageable really.

But in order to keep some of my hard work on view, I'll be copying some of the more interesting posts across. Apologies if you've seen them before, otherwise enjoy!
Posted by Matt at 01:50 No comments: