At last, after months of anticipation ... my first game of Warhammer Ancient Battles! What fun it proved to be too.

Darren's Early Saxons are not quite finished (as you'll see in the photos), and my HYW English aren't quite either, but that was not going to stop us! Whilst on the way to the Woolston Club I realised that I hadn't been quite this excited about the prospect of a wargame for some time.

The slightly later than planned start time meant that we didn't exactly get the pick of the scenery (hence the sci-fi ruin in place of a peasant hovel), plus I forgot to bring anything scenic along with me - doh!?

The game was a 1,500pt Pitched Battle, pitting the might of my HYW English (until recently Bretonnian) army, against Darren's hairy Early Saxon horde.

Deployment is where I usually make my first mistakes and this game was to prove no exception ... I deployed archers either side of the 'peasant hovel' with the intention of placing some spearmen in the hovel itself (don't ask me why). Darren pointed out that I could not deploy a formed unit in a building so they had to go to the left flank, whilst the men at arms and knights squeezed in on the right. The Saxons were screened by two units of (pesky) skirmishing javelin men. Pah - 'mere skirmishers' I thought - oh dearie me that was silly. The unit of tough looking skirmishing Saxon horse on Darren's left flank did give me pause for thought - rightly so as it turned out. 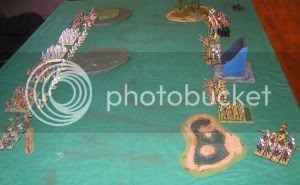 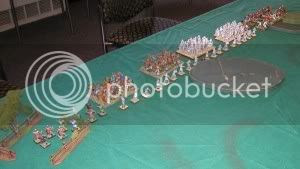 The first turn saw some reasonably archery from the English, though no Saxon units fled. The next two turns were different - the English archers almost totally lost the plot, plus the Saxon (Gehdrit) horse proved to be truly fearsome. Darren described my archers as 'shooting like old ladies' and he was right - his javelin skirmishers did better against my longbowmen. The agile Saxon horsemen soon despatched my cumbersome unit of knights and slew my general. The men at arms got bogged down in combat with saxon infantry who just wouldn't run away, then they were thrashed in the rear by the dreaded horsemen. At the end of turn six all that remained of the English were a few archers, giving the Saxons a solid victory.

Regardless of the result for my army it proved to be a very enjoyable game, plus being very instructive too. Darren's a great guy to game against and it was really good to play a game where the result was decided by manoeuvre, tactics and ordinary troops. Long live WAB!

Now I just need to get on and paint some more English ... and those Romans ... and a host of other armies.

A different way to wargame?

The girls decided to stage a battle of their own

That rabbit is going to take some stopping!

That rabbit really does give me the heebie-jeebies

The battle was quick and decisive ... the Dragon won!

In 2006 I had a resurgence of interest in playing Warhammer Fantasy Battles (WFB). By then we’d bought a house and got ourselves established here in NZ so I had the time to get more involved in the local gaming scene. However, playing WFB just wasn’t the same any more. It’s important to point out here that it had nothing to do with any of my opponents! I just didn’t get the same buzz from playing WFB as I did during the 80’s and 90’s. I started looking around at other games and, given my interest in all things WWII, Battle Front’s 15mm offering Flames of War (FoW) caught my eye and I duly bought some figures. However painting them proved to be a nightmare. They looked OK, but I found painting 15mm figures stressful! So that became a non-starter. Then WFB 7th edition appeared and I gave it another go, even running a campaign at one of local clubs. The result was much the same, initial burst of energy but no sustained interest. Although I still enjoyed the fantasy gaming genre and intended to keep (and paint more of) my WFB and Lord of the Rings figures, these games would only be played occasionally. That left me with a puzzle. What do for a gaming ‘main course’?

I considered 28mm scale WWII, but a lack of local players (at the time anyways) and the more important fact that I like the look of mass combat with ranked up units persuaded me to look elsewhere. Perhaps I should expand my small collection of 28mm Napoleonics figures from skirmish to mass battle? Again, local Napoleonic interest seems rather limited (so far as I know) and then only for 15-20mm scales. I’m firmly in the 28mm camp.

I’ve always been interested in Roman history, particularly the military aspects. In fact we joined the UK National Trust in 1995 on a visit to a semi restored Roman Villa near Bath. Add to this a keen interest in the politics and wars of Medieval Europe, anything from the Battle of Hastings through to the Wars of the Roses. So Ancient and Medieval wargaming seemed a natural path to take. Warhammer Ancient Battles (WAB) covers both very nicely.

Why WAB? As a long time WFB player the game system is very familiar, after all WAB is based on 5th edition WFB with additions for better representing historical troops and tactics. This is important considering that I’ll only manage a game every few weeks at best, so learning a whole new system would be tough. I briefly looked at the DBx rules, which seem to be popular locally, but somehow they just didn’t inspire me. I’d like to find out more about these systems but I think I’ll be sticking with WAB for now. Also, WAB just looked like so much fun. The WAB forum (http://www.wabforum.sadwargamers.co.uk/) is a really great forum with lots of knowledgeable and friendly contributors. Additionally, when WAB first appeared back in ’97 I duly bought a copy with the intent of collecting a historical army, so I already knew something about the system. But like many gaming projects of the time, it didn’t get far and I sold off the rules a few years later (doh!)

Now WAB is firmly the front-runner. I’m really enjoying working on my Early Imperial (approx 50B.C. – 150A.D.) Roman army, plus doing a bit of research in to Ancient British and Roman history. I’m reading a book all about Hadrian at the moment, heavy going in places, but mostly quite interesting. The era that interests me the most at the moment is the Roman conquest of Britannia in the 1st century AD.

Luckily I do not have to wait until I’ve painted a Roman army before playing WAB – phew! My WFB Bretonnian army (as mentioned elsewhere on this blog I think) will convert very easily to a WAB Hundred Years War English army. To that end I’ve been working on adding a few more archers plus tidying up some other figures in order to get the army ready. A friend has kindly loaned me the WAB ‘Armies of Chivalry’ supplement. Once I have my own copy of the WAB rules (in a few days!) I hope to arrange some small games.
Posted by Matt at 08:03 No comments: