Have been doing a lot of thinking about toy soldiers recently.

I've come to the conclusion that I'm really more of a historical gamer these days - though most of my gaming recently has been WFB. Luckily my WFB Bretonnian force makes a very good Hundred Years War English army - though a little bit of re-painting is necessary to make it look more 'English'.

I'm also very interested in
Should keep me busy for a while!
Posted by Matt at 06:00 No comments:

GW - "Old players are NOT welcome"

I'm always happy to help out making the hobby a better place for everyone ... so I just tried the GW THQ survey link from the UK email newsletter. The survey intro advised that it would take about 20 mins.

I typed my real age (mid 30's) then the survey said thanks for your input and closed. Tried again with '18' and got asked a raft of questions.

This is a pretty clear signal to me from GW. Older players are NOT welcome. If they had any sense, they'd filter the results afterwards so as not to offend.

Additionally, the surveys after question 1 if you enter Female. Ages 34 and less appear to work fine. I guess I'm just too old.

Right - now where are those Napoleonic (i.e. 'proper' wargaming) figures?

My friend Dave H sent me a report of his recent game with John D. Fun to read so I thought I'd blog it. Enjoy!

"Played John from Comics with his Lizardmen at 1500 points, so thankfully no Slann to deal with. His list was fine I thought - a General and L2 Skink Priest for characters, 2 large units of Saurus, 3 units of Skinks (1 as scouts), and 2 big units of fear-causing strength 7 Kroxigor. Suspecting he favoured using Kroxy's and no doubt the movement 9 strength 7 character as well, I opted to not take my chariots because of that damn S7 auto-destroy rule. My General was foot-slogging with the lads and I put the second Orc Boss back in the list riding with the Boar Boys, who also got the Banner of Butchery hoping to make an impact when they arrived!

John took first turn, and advanced his 2 big Kroxigor units straight up the centre towards my Orc units. His skinks were too far to shoot and his magic fizzled, and it was my turn 1. Thankfully the trolls passed Stupidity and ran forward to angle across directly in front of the Kroxigor, hopefully to prevent them from charging either of my Orc units and considering that they were almost certainly going to lose combat I also hoped the over-run would be deflected away from the General's unit.

My magic phase was easily dispelled but one spear chukka crew managed to hit a Kroxigor. causing the full D3 wounds to reduce one unit down to 3.
I'd opted for a refused flank on the left, with the Squig Hoppers and Boar Boys on the right, and just the Shaman's Arrer Boy unit on the centre left facing 2 large Skink units alone. Oops! The Squig Hoppers bounced a bit too far into the forest on their move, to end up right on the opposite edge of it right in front of a swampfull of blowpipe-toting Skinks. Oops again! The Boar Boys got in their first - and only - 14" move up the side of the forest before getting within march-denying range of the hidden Skinks.

The trolls had positioned well to draw both units of Kroxigor which both charged in on John's turn 2. Luckily for me John fluffed most of his shots into the Squig Hoppers who were -2 to hit being just in the edge of the forest still, and only 3 fell to poisoned shots. The Shaman's Arrer Boys only lost a single lad and I used my single scroll to deflect a nasty Steal Soul spell which threatened to suck a no-save wound from my General. The Kroxigor hacked into the Trolls and causing about 8 wounds, of which the Troll's did well regenerated and only 1 died. However they failed to hold and fled back 9", luckily not close enough to cause a panic to the General's unit and the squabbling Arrer Boys nearby. The Kroxigor lumbered after them 7" - ripe for the counter charge. Phew!

As John had advanced his Saurus up behind the Kroxigor, and the hordes of skirmishing Skinks were hovering about 7" out from the Shaman's Arrer Boys ready to shoot them to oblivion on his next turn, I had no option but to call the Waaagh! The Orc unit on the centre left surged a full 6" ahead towards the Saurus while the General's lads surged into the flank of the nearest Kroxy' unit, and the Hoppers ignored the skinks to their front to bound sideways into the opposite flank of the second Kroxigor unit. Chomp! Declaring charges I got the other Boys unit successfully into the Saurus thanks to their Waaagh! move eating up the distance, but the Shaman's unit failed their charge when the Skinks in front of them did a runner. The Boar Boys crept their 7" around the forest towards the swamp but being march-denied were in for a long ride to see any action. Damn my poor deployment!

Within 8" of the General the Trolls rallied and turned around, but magic and shooting were a fizzer. Combat was splendid with the General's unit destroying their 3 Kroxigor foes and over-running into the flank of the second unit of 4 - which was then reduced to 2 Kroxigor after being chomped by the remaining Squig Hoppers. The Orc boys on their own were up against John's General and his Saurus unit. Surprisingly John challenged my unit champion with his one, and his General took his own attacks against the rank and file. My champion slew his opponent in convincing fashion with 3 wounds inflicted. The lads didn't fare so well as John's General got his attacks in first thanks to wielding the Sword of the Hornet and killed 3 in turn. The surviving front-row Orc failed to wound but I won combat thanks to an extra rank, although with Cold blooded determination the Saurus stayed put for another round.

On turn 3 the Shaman and his Arrer boys took heavy poisoned-shooting casualties to flee clean through both spear chukka crews, who in turn lost their bottle and decided to leg it as well. The Boar Boys continued their leisurely trot around the scenery (but looked very nice), while the second arrer boy unit could see nothing but a bunch of trees and 3 Troll's arses, so decided to keep squabbling. No such nonsense for the Orc boys and the Squig Hoppers. The vanilla Orc unit again won their combat despite being up against John's General, as his Saurus rank and file totally fluffed their rolls to hit. This time he rolled 5's and 6's so even Cold-blooded couldn't save him, and the Orcs ran them down with glee. Victory was in sight! My General's Orc unit combined with the Squig Hoppers easily wiped out the remaining 2 Kroxigor, and both over-ran towards the Skinks in the swamp trying to avoid the second Saurus unit which and advanced right up on their flank. The Hoppers bounded an astonishing 15" to chomp into the Skinks, while the General's lads waded out deep enough to escape the charge arc of the Saurus but would be bogged-down for the rest of the game.

John's remaining Saurus unit charged into the Trolls, killing one and fleeing the rest but again failed to catch them. His Skinks in combat with the Hoppers died horribly, while the other two Skink units were now alone on the left flank with no foes to face.
In the ensuing turns the Boar Boys continued their wide semi-circuit of the table to arrive with the timing worthy of Americans in a world war, precisely at turn 6. Idiots. The remaining 4 Squig Hoppers managed to bounce another huge distance through the forest to take the second Saurus unit in the rear as it chased the Trolls, munching several of them including the pesky Priest who had just killed my General with his evil Shadow magic spell. Losing half their number in counter attacks the Hoppers fled but successfully to rallied on L5 in their final turn. Yay! They sure were the unit of the match for me. Despite losing my General in the end it was still a solid victory to the Orcs, and a really enjoyable game."
Posted by Matt at 08:33 No comments:

Details soon!
Posted by Matt at 08:32 No comments:

I couldn’t attend Cavaliers as it was PTA meeting night. I invited Dave round for a game – makes sense seeing as how he lives just 250m round the corner!

To keep things simple we opted for just 1,500pts. I quite like these size games as they don’t take too long and do not permit Lord character choices. They’re usually much more about troops and tactics rather than rock-hard characters.

(It’s been a little while since we played so forgive me if the details are a little hazy!)

The game was really good fun, with the tide of battle swing first with the Orcs, then to the Dwarfs, then back to the Dwarfs, etc. A duff bit of deployment meant that my Longbeards ended up on the left flank where there Old Grumbler’s rule (no panic if within 6”) was of little use. The cannon was a complete waste of points – it’s most effective shot being when it was used as a giant shotgun against a few Boar Riders!

The Slayers did marvellously against their favourite opponents, routing them twice before the Trolls fled the table. Only a handful of weary Slayers remained. Here’s a couple of pics. 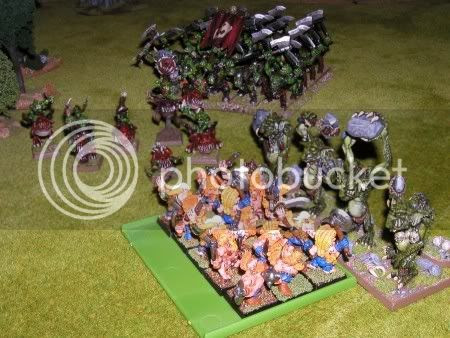 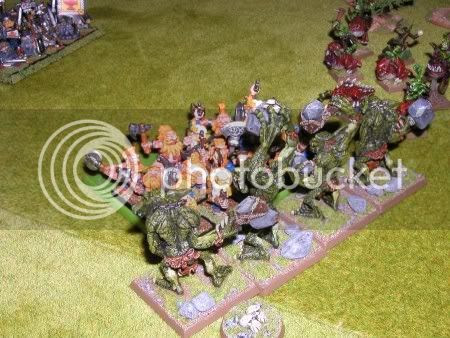 The game hung in the balance until the final turn (6) when Dave called the Waaagh! This meant his Black Orc led unit of Orc Warriors were just able to catch a unit of Dwarf Warriors in the flank – after rolling a massive 6” for the Waaagh move and then charging a further 8”. The Dwarf Warriors fought valiantly but were badly beaten and they fled.

Totalling the victory points showed that Dave had won by a mere 30 or so VPs. It was a great game with plenty of hilarious moments and a close result too. But another entry has been scribed in the Great Book of Grudges!
Posted by Matt at 11:49 No comments: