No difficulty guessing what this is all about eh?  Yes, the Lardies are about to launch Infamy! Infamy! so I’ve dusted off my Early Imperial Romans.

I’ve quite a few suitable figures from my Warhammer Ancient Battles and War & Conquest days, so it’s nice to be in the position of having a fully painted force ready to go, with a lot of extras ready too.

The figures are all Black Tree Designs with LBMS shield transfers.  I’ll order up some sabot bases from Charlie Foxtrot. 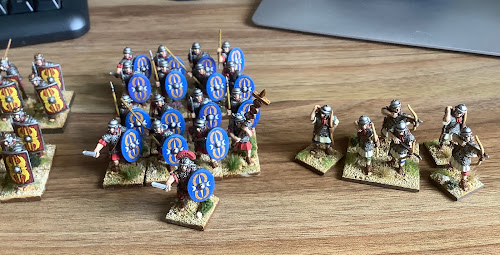 I found these ‘tokens’ which I think might be suitable as some sort of deployment point? 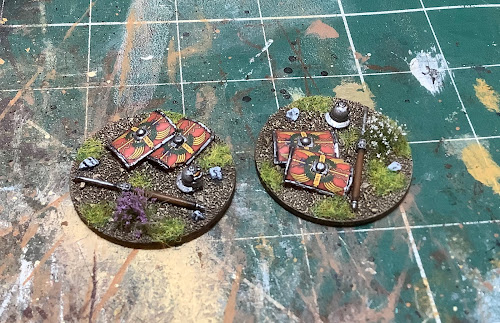 Even better... whilst sorting these out I stumbled upon a box of Ancient Germans so that’s some allies (or enemies?) sorted.  Anyway, I’ve ordered up one of the bundles and look forward to getting the PDF on Monday 29th June.  Currently on the painting table are some lovely resin pieces of scenery that I’ve had in the bits box for years, plus some old Dark Ages pieces are getting re-purposed for an earlier age.  If you want to find out more then have a look on YouTube for a series of Lard TV videos where Lardy Rich discusses some example forces, plus there’s also a series of three “movies” 😂 that run through a basic battle between Rome and fierce German tribesmen!
Posted by The Wargames Table at 16:52

They look great! I started on my Roman army but only managed to get as far as two groups of 8 Romans before hitting a painting block. PDFs will be released tomorrow, that's exciting. Can't wait to see all the AARs.