Orange Dave and I were keen to get on with our Sicily/Italy campaign so game two was arranged to coincide with our inaugural visit to Bristol Independent Gaming. Here's the table with some troops deployed ready for the off.

Before I get on to the game I just want to say a big thank you to Jim at B.I.G. for a superbly warm welcome. Beforehand I'd mentioned that Dave and I were doing Bolt Action in Sicily so Jim laid out a splendid table for us. I arrived, we had a quick chat then he showed me the table and frankly I was blown away at how welcome we were made. Well done, sir! We will definitely be returning! Regularly I hope.

Anyway, game two of our campaign sees Dave's victorious Allied force pushing inland after their successful initial assault. We'd agreed that in game one, if the allies took the bridge then they would be allowed armour for the next game, so I was firmly expecting at least a Churchill. In this encounter the allies have pressed their advantage sweeping inland in an attempt to capture a ruined hill-top village.

In campaign terms for this game Dave suggested that if the Allies won then that would mean their advance across Sicily was so swift that they would be able to launch an attack on the Italian mainland before defences could be properly prepared. But if the Axis powers held the village then the subsequent landings would be against well prepared defences.

Here are the defenders of the ruined village. A couple of veteran squads with lots of LMGs, two MMGs and a sniper team. Dug in and hidden they await the onslaught of the allies.

Dave opened proceedings with a pretty fearsome preliminary bombardment. Relatively few casualties but plenty of pin markers on the brave defenders. The first turn or two would definitely be spent rallying the chaps ready for a tough fight.

The first two turns were pretty quiet really. The Axis troops busied themselves with getting back some semblance of order, whilst the Allies were advancing quite cautiously. I think Dave was concerned about the amount of potential fire-power packed in to the ruins of the village.

Turn three and things are warming up... The Germans have started to bring on their flanking force in the form of a Panzer IV and some Heer Grenadier squads. A hasty shot towards the (newly painted) British 25lber resulted in a miss. I then wondered if the Churchill would have been a better target ... too late!

By this point Dave had also started to bring on his reserves. The Paras (from game one) were double timing along the road, determined to storm the hill! A truck full of regulars were also in reserve but the driver was clearly a bit lost as Dave twice failed the necessary morale check. This was to prove a useful breathing space for the Germans.

Dave troops - mainly inexperienced soldiers - started to climb the slopes but were met with a hail of bullets. The discs on the far side of the hill are smoke markers - Dave was trying to use his mortars to limit the arcs of fire available to the Germans and thus cover the advance of his second wave.

The view from above the German position. Turn 5 and Dave's Churchill takes a shot at the Panzer IV... The aim was good but the Panzer's armour held firm and the shot ricocheted away! A return shot was too hastily taken and missed by a country mile.

Turn six and the crew of the Churchill have zeroed in on the Panzer IV, this time the shot struck spectacularly and the German tank brewed up in fine style.

From the Allied point of view, you can see that the Paras have gained the slopes of the hill under cover of the smoke barrage. Also the delayed truck full of regulars are about to de-bus at the foot of the hill. But would it be a little too late to carry the day? 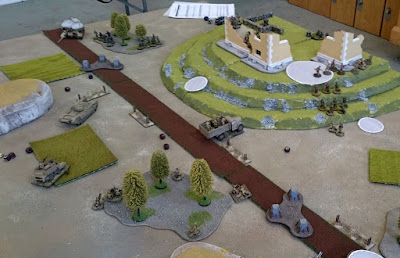 Now, we don't normally approve of 'sniping' with tanks but the only clear target that the Churchill had was the German CO scrambling up the slope as he tried to rally his men.... One carefully aimed HE round later and the officer was scattered to the winds. 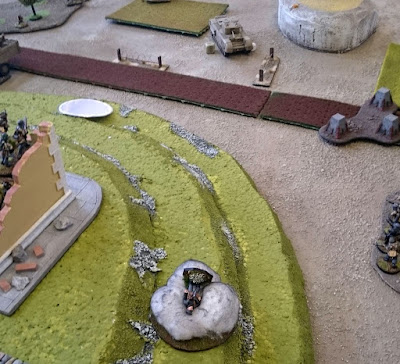 During this turn the Paras stormed through the Veteran squad that remained in the ruins and then prepared to deal with the MMG and Sniper team.

We rolled for turn 7 and continued to play... Below you can see another Heer squad moving up from the woods to try to keep a hold on the hill, but to count for victory purposes they had to reach the top-most 'layer' of the hill! 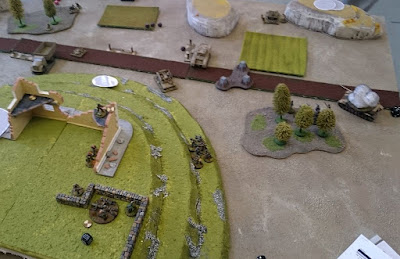 The MMG opens up at point blank range as the NCO from a section of regular infantry rushes towards them. Very brave but ultimately foolish. The Paras used the distraction to shower the MMG crew with grenades and then finish them off with a hail of bullets from their trusty Sten guns.

So turn seven finished with the sniper team still intact amidst the ruins of the village. A win for the Axis powers ... by the very narrowest of margins!

But just for the fun of it we carried on anyway. Here the last Para - a very tough sergeant - takes on the sniper. 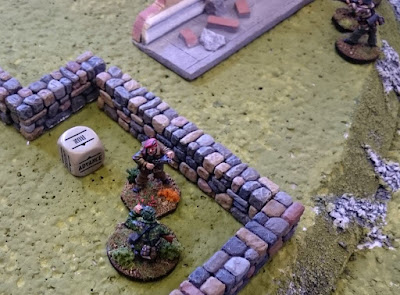 In the background you can see the Heer squad that were trying to reinforce the hill. Their mad dash up the slopes left them in view of the Churchill as it rumbled closer to the hill. It opened up with both MGs and an HE round. As the smoke cleared no Heer remained standing - the Churchill crew were definitely going for 'man of the match'.

One more turn saw the Allies mop up the last few Germans, but in campaign terms their advance across Sicily had been sufficiently delayed to ensure the German troops on the mainland would prepare a very warm welcome!

Well done to Dave for knocking up a hill especially for this game - much appreciated matey! :o)

I must say that linking these games with some straight-forward rules (all Dave's ideas!) has made them so much more meaningful. Anyone who has played in such a campaign will know exactly what I mean. It's hard to put in to words, but the games seem to take on a life of their own. I look forward to doing something similar for a Normandy campaign with Paras vs Panzergrenadiers..
Posted by Matt at 11:15 4 comments:

A recent trip to see friends in Cornwall was an absolute blast! Some of the best fun to be had in a l-o-n-g time! Thanks to Colin and Nik, Paul and Helen, and Vicky, plus the boys for a superb weekend of fun, games, great company, fine food and excellent walks!!! This included a first play of a truly awesome after dinner card game (which is a must-buy) plus ... I learnt a huge amount about Robots, Marvel Superheroes and Dinosaurs! ;o)

Games first ... of course we managed to squeeze a couple of games in between all the sight-seeing. The first game was splendid Kings of War bash with Colin, which (being a KoW supremo) he won with ease. I've blogged about KoW before so 'nuff said. The other game we played was none other than the latest offering from Too Fat Lardies ...

Now, Paul has only just taken delivery of a hefty order from Front Rank miniatures (we were opening the packs to put them on the table!) so only a few are painted, but hey, who cares when you're keen to try out some new rules!

I'll do a proper review in future but in brief you need around 50 figures plus a few extras, the game takes a couple of hours (a little longer for us as noobs) and IMHO captures the feel of small scale Napoleonic actions very well indeed. The game seems to unfold like a story or a set of scenes from a play. It's hard to explain.

In game two Paul managed to drive off my skirmishers with his own and then launch what can only be described as a spectacular flank attack at the point of the bayonet. Up til that point my dice rolling had been jammier than a pot of Hartley's finest but then he really pulled it out of the bag to claim victory. Truly the stuff of a proper Sharpe book/film!


Naturally a few pics were taken whilst out and about. Never as good as being there but hopefully you'll get the idea. Colin guided us around a local landmark called Kit Hill. A fine, relaxing walk and a spiffing lunch at the cafe! Thanks matey!

Paul guided us along a favourite coastal walk; Porthtowan to St Agnes Head. The weather was amazing - it really couldn't make up it's mind. Blustery rain one minute, warm sunshine the next! Getting out and enjoying the landscape is good for the soul I reckon.