Every wargamer worth his salt should do a little re-basing from time to time ... Here I've started re-basing my Early Imperial Roman figures with view to multi-basing them to suit a range of rules. 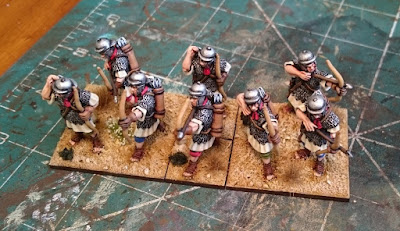 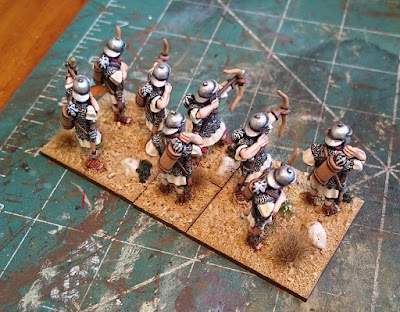 This is how I posed them to get an idea of how I wanted the finished unit to look.

Then out came two pairs of pliers to try to 'pop' them off the bases by twisting opposite corners. Foolishly I had super-glued them to the bases (do not do this!) but with a little application they came off okay.

These 8 figures are actually taking up the space of 10 figures, but as I have 16 I'd like to use them as two "troops" of archers for my Kingdoms of Men "Kings of War" army. For historical games they would simply be two detachments from an Auxiliary cohort.

My Romans were originally organised and based with a view to campaigning in the newly conquered province of Britannia, but I've decided to abandon it to the barbarians and head East to the flesh-pots of Syria and look at first century action in Ephesus, Antioch and beyond, hence the desert themed basing.

Basing recipe: VMC Gold Brown (877) base then highlights of VMC Tan Yellow (912) and VMC Dark Sand (847). This was followed by a few grass tufts, flowers and some tiny bits of dark clump foliage. The edges were tidied up using Foundry Bay Brown shade (42A).

The level of detail in Colin's army has to be seen to be believed. The skellies have individually painted teeth for goodness sake!! Don't even ask about the skeleton giant - he could almost qualify as an orthopaedic surgeon after that conversion. Anyway, back to the bases ...
Posted by Matt at 07:47

Both the painted figures and the basing look superb. Adding a little colour with the tufts and flowers really finish the desert bases off. 10/10.