A while back I ordered a heap of bases from Warbases in order to get a little further along the way to being able to play Dux Bellorum. However, my inner gaming butterfly soon flitted elsewhere and they were consigned to a storage box.

But ... now that I'm in the process of applying magentic basing I've been sorting out my Saxon forces and realised that I had more than a few Early Saxons (from the superb Musketeer range, sold by Gripping Beast) mixed in with my 9-11th century fellows. So, here they are on their as-yet-to-be-sanded-and-painted movement trays.

That's 1 x Companions, 2 x Noble Warriors, 3 x Ordinary Warriors and 2 x Skirmishers, giving a total of 26pts! All I need to do is paint a couple more Gedriht and 5 javelin armed Geoguth and that's an army ready to go! OK, I may also go through them and replace a few of the larger shields with bucklers as that's how I see them being equipped in the 5-6th centuries.

However, it's a slightly different story for my Romano-British ... as you can see in the pic below.

Rather more to do here methinks! That's 1 x Companions, 2 x Noble Shieldwall, 2 Ordinary Shieldwall and almost 1 x Skirmishers. Only 22 points, and quite a mix of figures, GB, Musketeer, West Wind and Artizan. Oh dear - more discipline is definitely required when buying toys. Fortunately they mix fairly well. What these chaps need (aside from a couple more packs of ordinary warriors) is some cavalry! Thankfully, there are several good ranges out there - my favourite is probably the new(ish) Arthurian cavalry from Musketeer.

So, still some work to do but I'm pleased to find that I have more troops ready than I realised. If anyone has any tips for players new to Dux Bellorum, e.g. army size, composition, key rules, etc, then please do let me know.

Magnetic Basing – A How To

For some time now I’ve wanted to enhance the basing of my forces with magnetic basing. I’ve been to quite a few events where players turn up with boxes of figures already on movement trays and thus can be deployed ready to play in minutes. Whereas I’ll be half an hour or more moving figures from compartmentalised carry cases on to movement trays, trying to get them to rank up nicely, etc, when I should be fighting the battle! So here’s a few tips based (no pun intended!) on my experiences.

First step was to ask around and two companies were suggested. Magnetic Displays and Hasslefree Miniatures; I can heartily recommend both in terms of service, value and product quality. For pre-cut circular magnetic discs I’ll go for HM, but for rectangular or square bases I’ll use the magnetic ‘tape’ from MD – plus they also sell the magnetic steel ‘paper’.

Here’s one of my trays (please do not adjust your set!) with a mixture of metal and plastic figures. 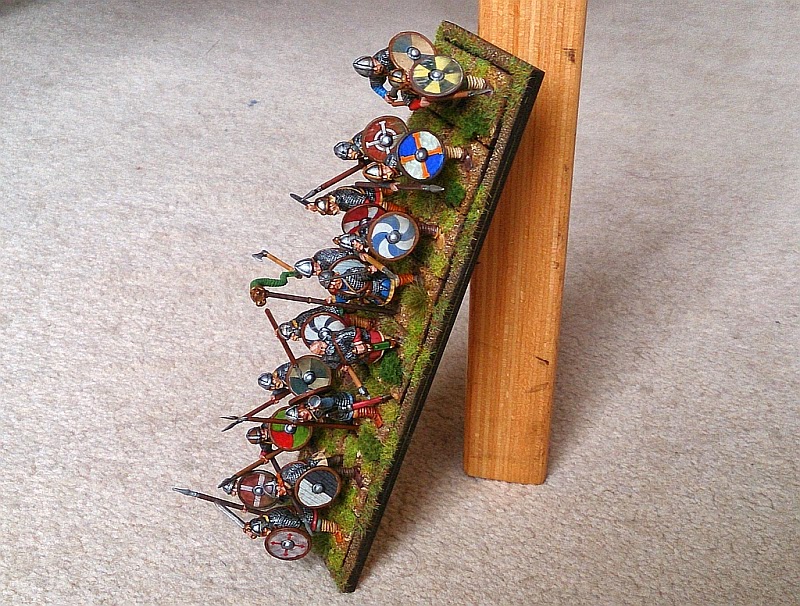 The trays are from Warbases and I’ve used the steel ‘paper’ from MD (available in white, green and yellow) to line the tray. Ensure you allow a millimetre or so ‘clearance', i.e. make the insert slightly smaller than the trays internal dimensions, otherwise it never seems to fit properly. 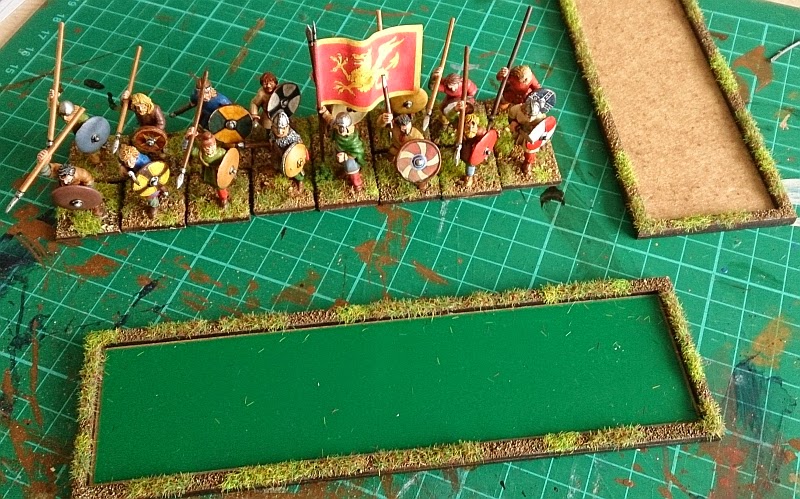 Another tip is to prepare the edge of the tray (sand, paint, flock) before adding the insert otherwise the flock can get stuck to the edge of steel ‘paper’ where the adhesive can sometimes be seen.

The discs are simplicity itself – just find the right size for your bases – mission accomplished! You may also find that it’s cheaper to use several smaller discs on larger round bases rather than buying the larger discs. 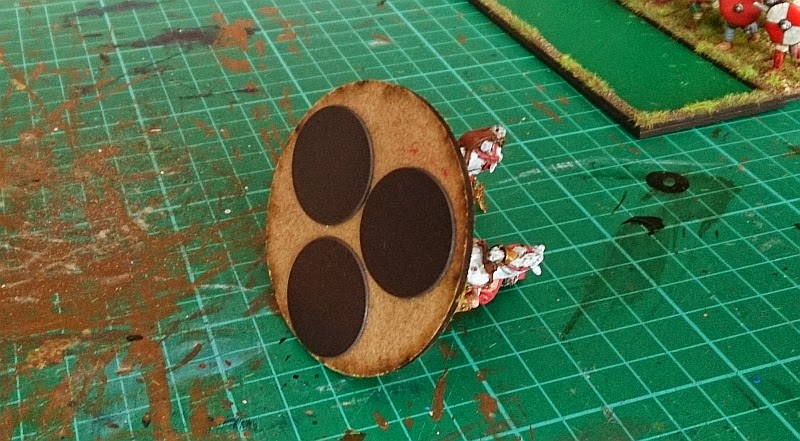 For my 20x20mm square bases I ordered the 20mm width tape which is available in 2m or 5m rolls. I’d suggest trimming off 25-30cm lengths and flattening under a pile of books overnight before using as this removes the tendency for it to curl up. 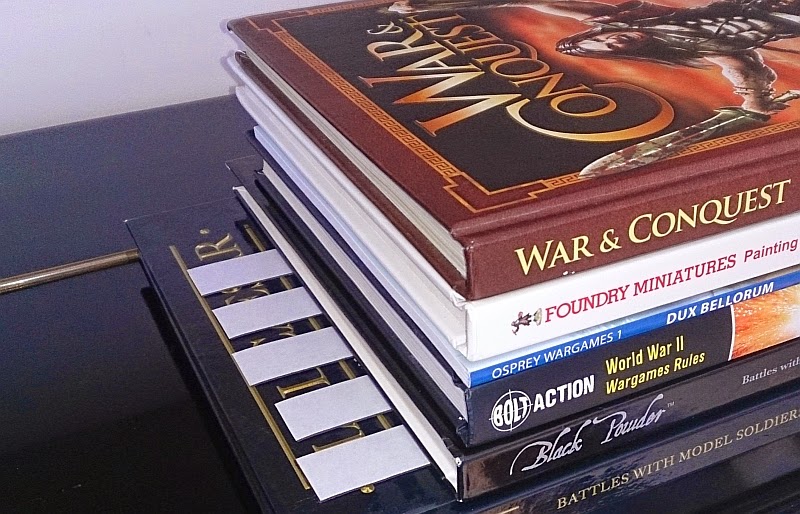 I’ve found that trimming it in to 19mm lengths (good scissors work perfectly well) gives the best results in terms of getting a neat finish on the bases. I started with 20mm lengths but aligning it precisely on to the bottom of the base can be tricky – although it’s easy to trim off any overhang with a modelling knife.

The paper backing  of the tape has a rather waxy finish so I’d suggest marking the 19mm lengths using a sharp pencil – propelling pencils are ideal. Even a fine permanent ink marker wouldn’t write on the shiny surface.

OK, so now I have magnetic based figures and movement trays lined with steel paper. How to transport the trays of figures? I have a number of shallow Really Useful Boxes (very good product!) and to stop the trays sliding around I purchased an anti-slip rubber mesh from Lakeland. 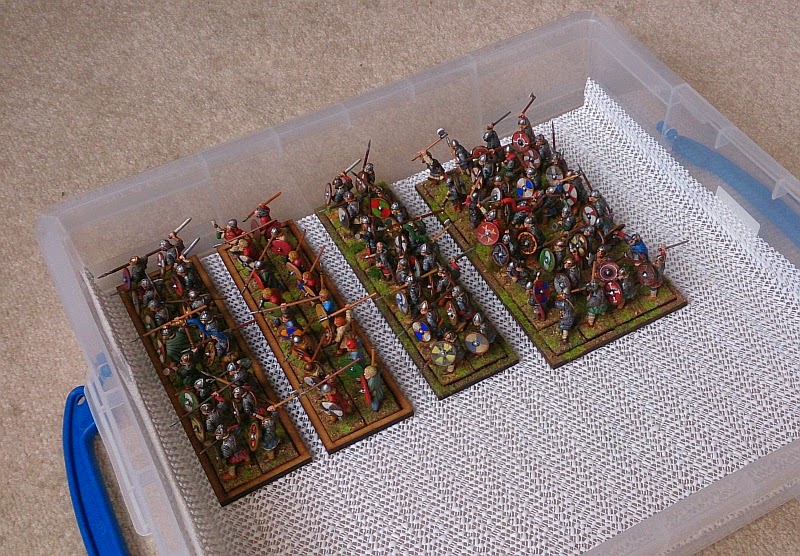 For individual figures, personalities, counters, etc, I lined one of the boxes with steel paper so that they could be placed directly in the box.

So there you have it – how to use magnetic basing. I hope that’s been of some use.
Posted by Matt at 15:36 3 comments:

The Battle of St Walburgha's Day

What better way to spend a day of the recent Bank Holiday weekend than by getting a few chums to come and play some Dark Ages War & Conquest? The armies total roughly 5,000pts per side. The scenario can be found here.

"Early Summer in the the year of our Lord 934, on the blessed St Walburgha's day, the cruel Pagans did form an alliance between Norseman and Dane, and make war upon our realm. Having visited much slaughter and rapine upon the good people of Mercia their numberless host crossed into Wessex. Brave Aethelstan of Wessex, with aid from the stout men of Kent, led by Uhtred Dane-Slayer, formed their shieldwalls beside the steading of Ultfun and the monastery of St Aethelbert. A great battle was fought and many good men did perish. Praise the Lord that the Heathens were stopped and their invasion crushed."

Here are the armies lined up and ready to do battle. You can also see Prize-Winning Phil (did I mention that he picked up TWO prizes at Legionary!) about to offer Rob the benefit of his great tactical acumen. 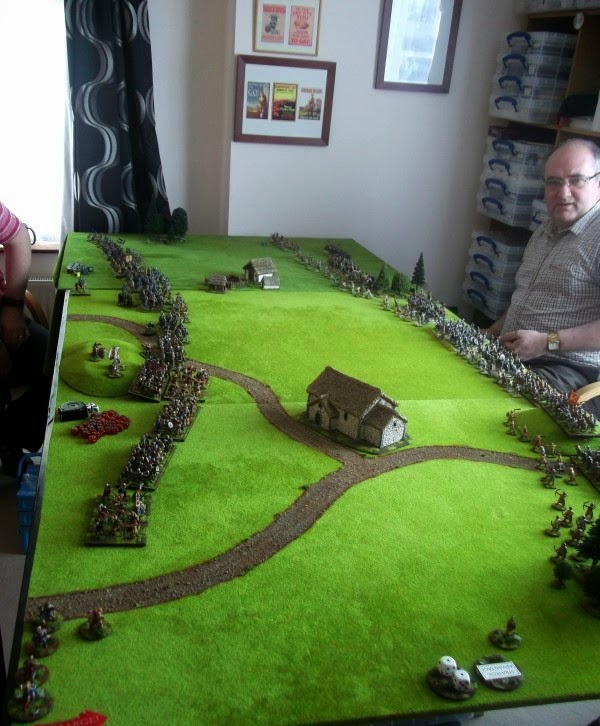 The Danes (led by Jenny) face the Saxons of Wessex (Rob) with the monastery of St Aethelbert between the armies. 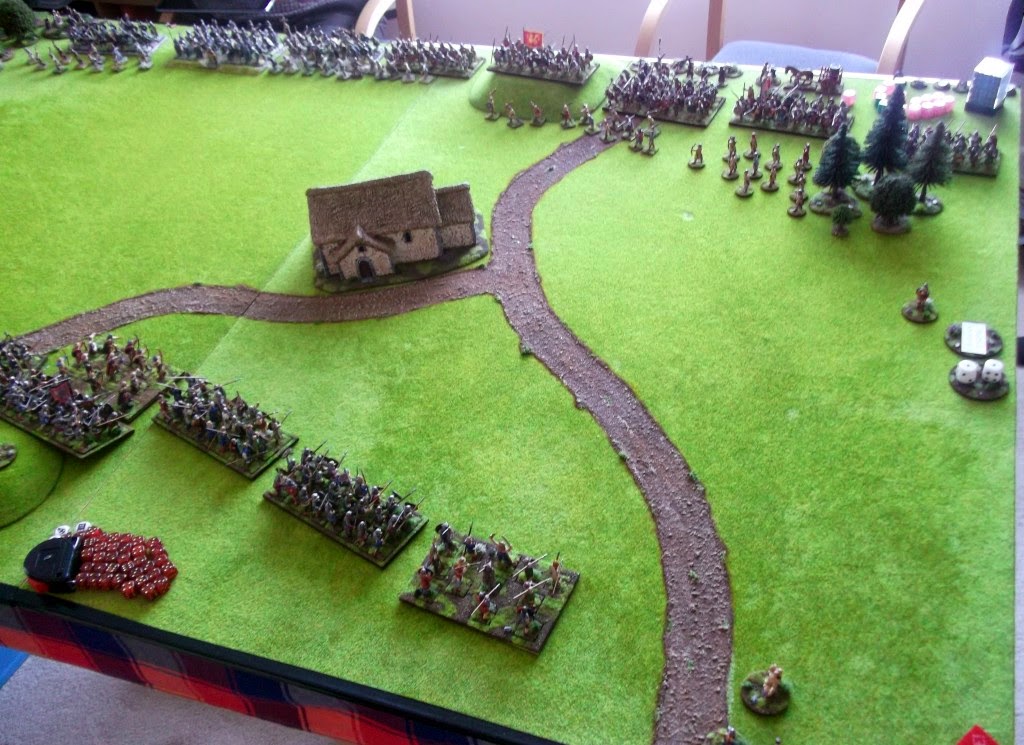 The Norse Vikings of Jarl Lurkus the Bold (led by Steve) make ready to take the steading of Ulftun before Uhtred's Kentish men (Prize Winning Phil) can reach it. Surely the monks will have hidden their gold amidst the midden heaps? 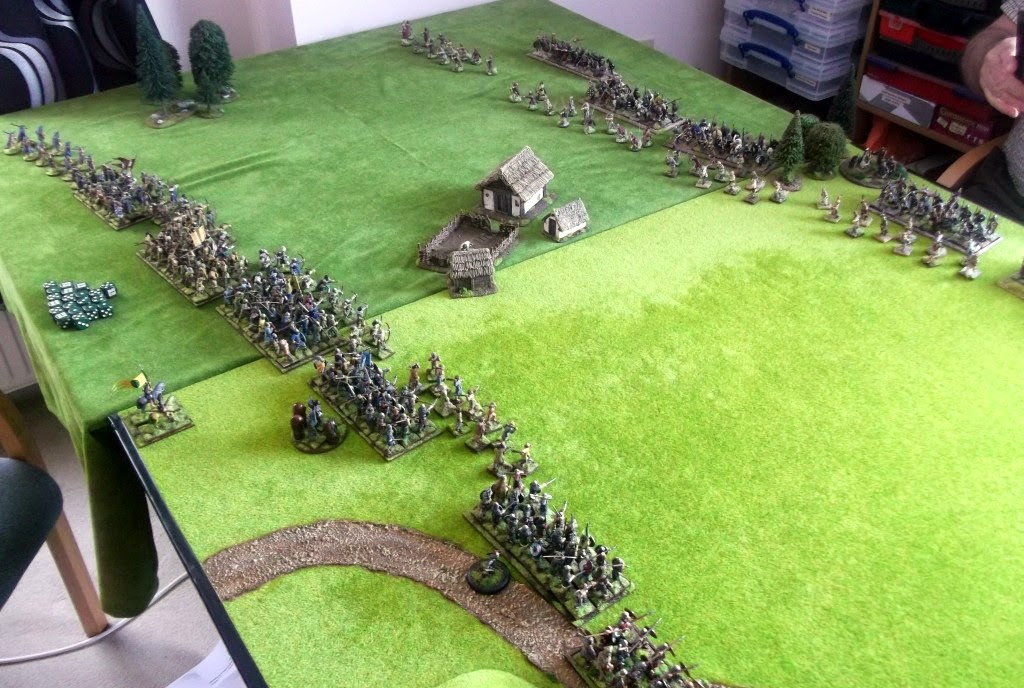 A view along the Viking line.

And now the Saxons. 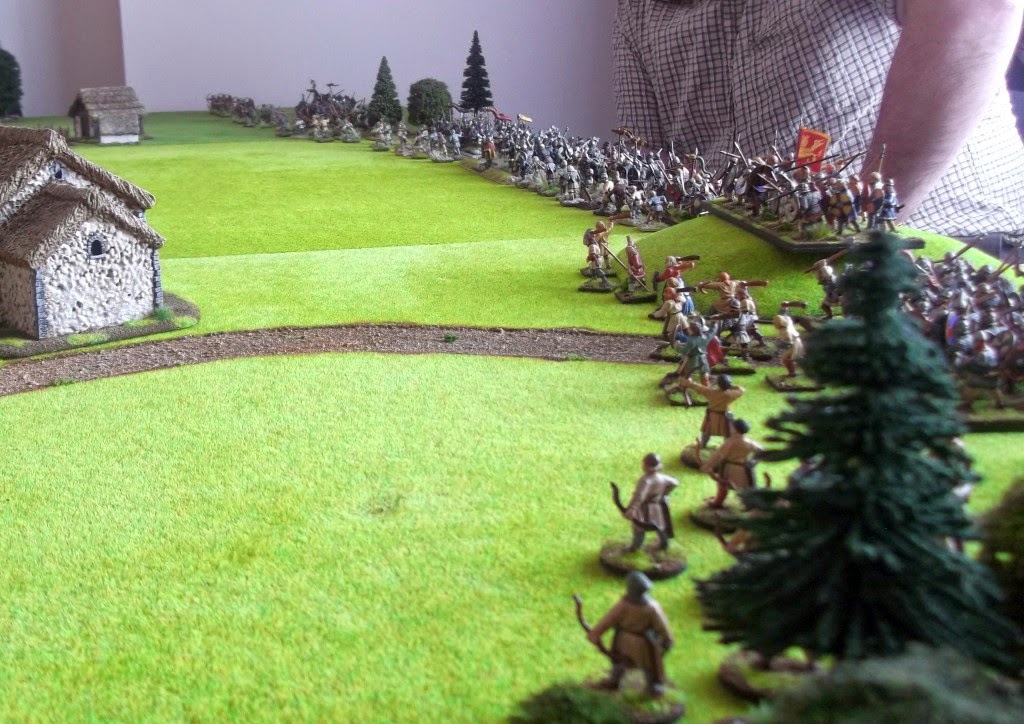 The armies get moving. The first few turns see the shieldwalls getting into the most favourable positions whilst skirmishers clash ahead of the main fight. 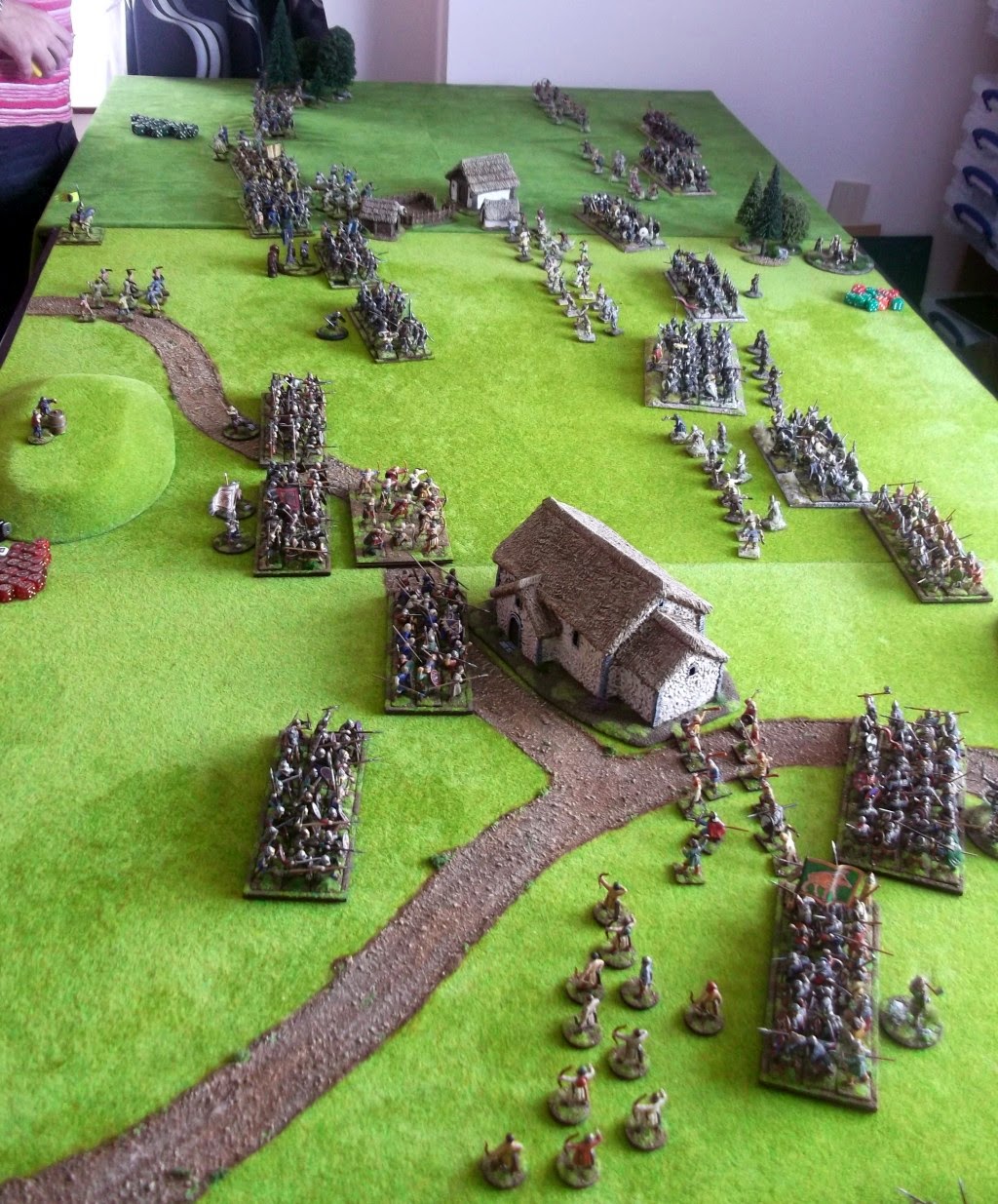 The Danish Hirdmen and Bondi secure their flank on the monastery. 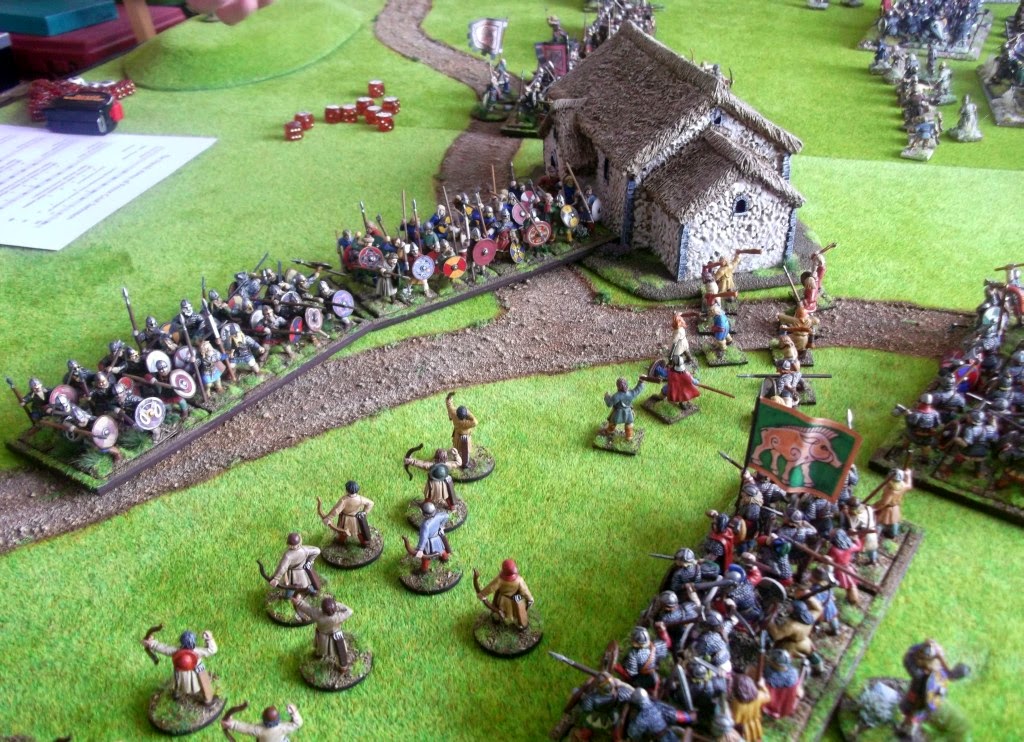 Here we see that the Hirdmen (in the foreground) have charged the Saxons but the Thegns and Ceorls have held. Further across the field it appears that Prize Winning Phil's brave men of Kent are finding the Norse to be a very tough foe! 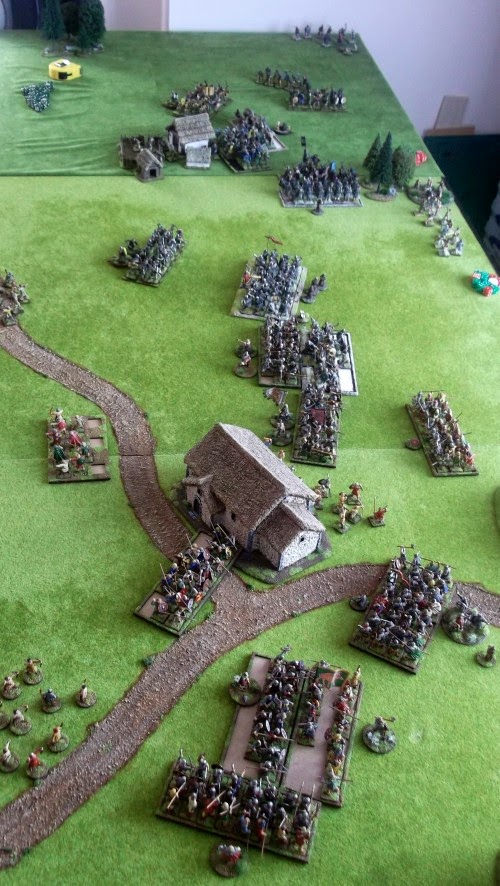 The Hirdmen are flanked but stubbornly refuse to break. 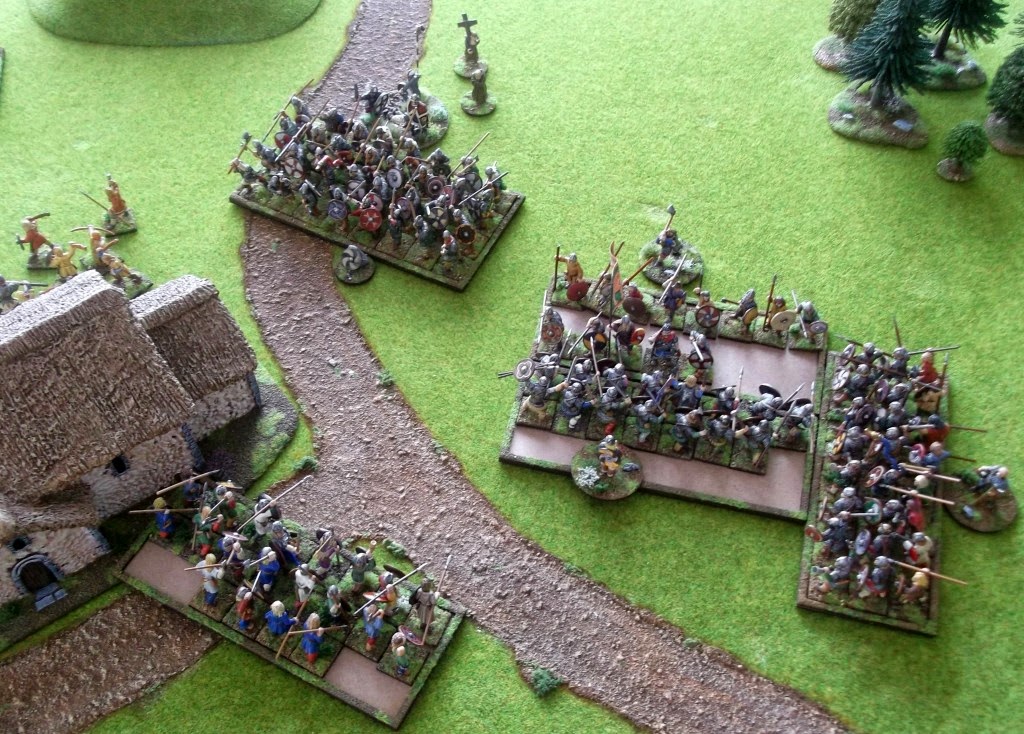 The remnants of Uhtred's Kentish army are swiftly butchered by Lurkus' Norse. Uhtred himself fell bravely in battle, surrounded by the bodies of his loyal hearthguard - what else can you expect from an heroic Saxon leader? 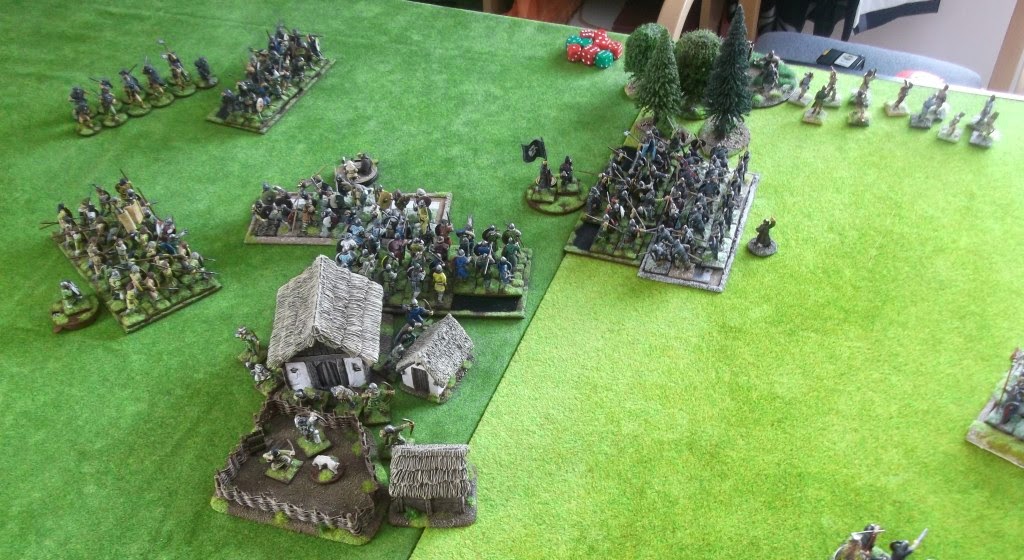 Alas, I didn't take any more pics but I can tell you that the men of Kent were slaughtered, as were the Danes. This left the men of Wessex to deal with the rampant Norse. After a few more turns of ferocious combat the Norse Jarl also fell - sword firmly in his grasp. With that the badly battered army of Wessex took the field.

All jolly good fun and a real pleasure to host. My thanks to Jenny, Steve, Rob and Prize Winning Phil for being such splendid players. More please!

It’s May so it must be time for another Legionary show in Exeter! This year Scarab Miniatures had arranged a modest War & Conquest competition. There were two categories; “Dark Ages” and “Classical”. I could have entered either but settled upon giving my Saxons a run out. Fellow competitors in the Dark Ages competition were fielding Picts, Vikings and more Saxons.

Now, I should point out that whilst it is billed as a “competition” I can assure you that the atmosphere is very relaxed and aimed entirely at having fun games – just the ticket! Here’s a pic of the games in full swing. 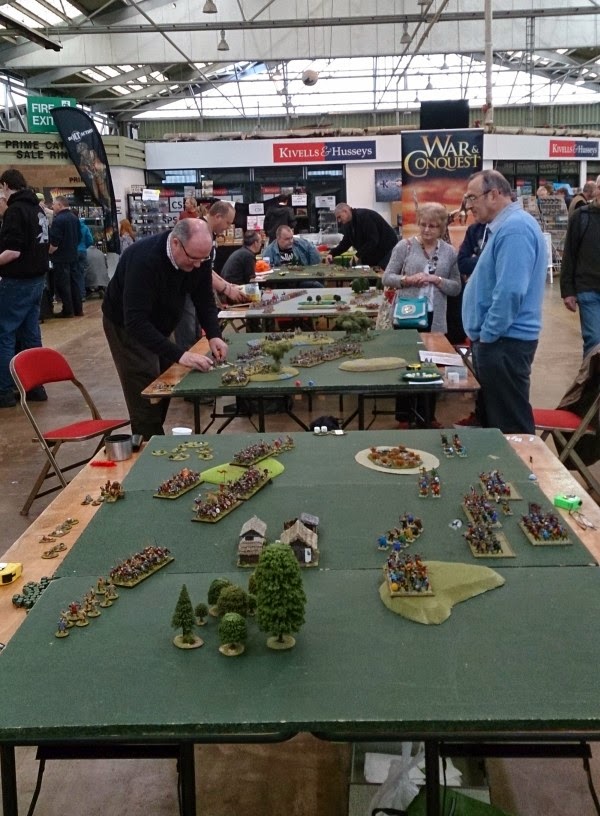 Round One
The classic Saxons versus Vikings battle. My opponent was ‘Dave the Viking’. He’s certainly called Dave but I’m fairly sure his surname isn’t “Viking”!? Here’s a few pics 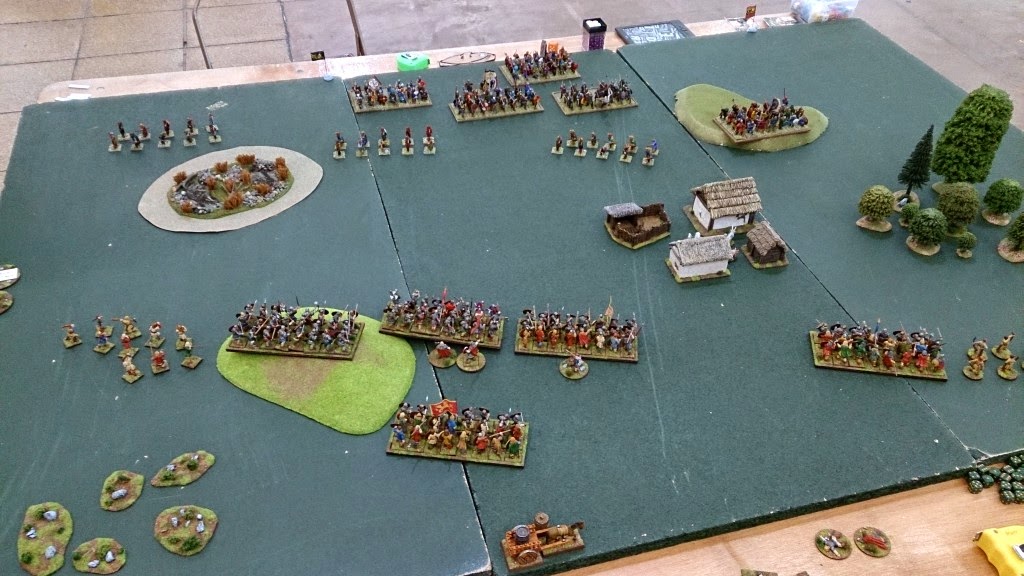 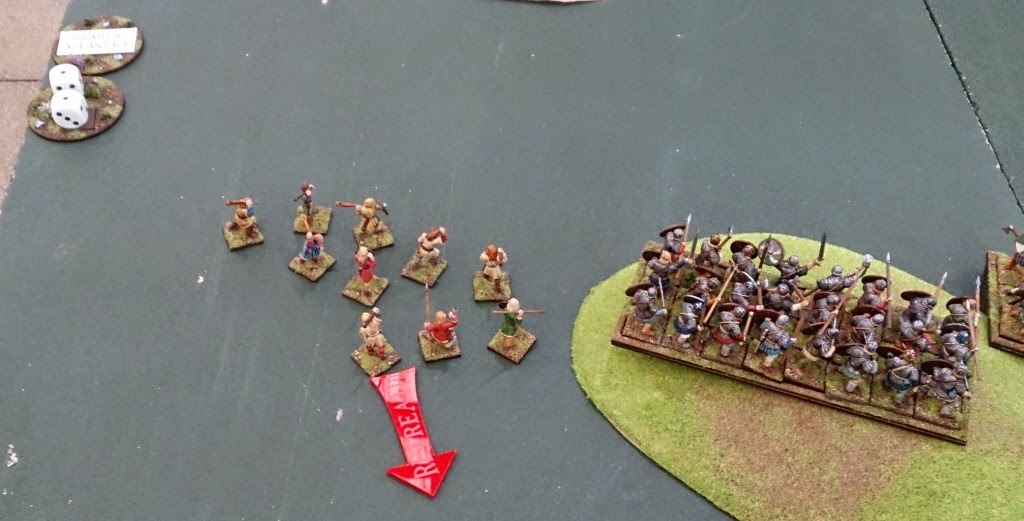 This, like most games of War & Conquest, was a fairly close game right up until then end. We both had the ‘take and hold’ objective so the centre of the field saw some ferocious combat. After the allotted seven turns neither of us could claim outright victory so the points were added up and Dave was the winner. Well done mate!

Round Two
After a quick spot of lunch and an even quicker run around the games and trade stands it was on to round two. My opponent was Alan and his lovely Pictish army. Here’s some pics. 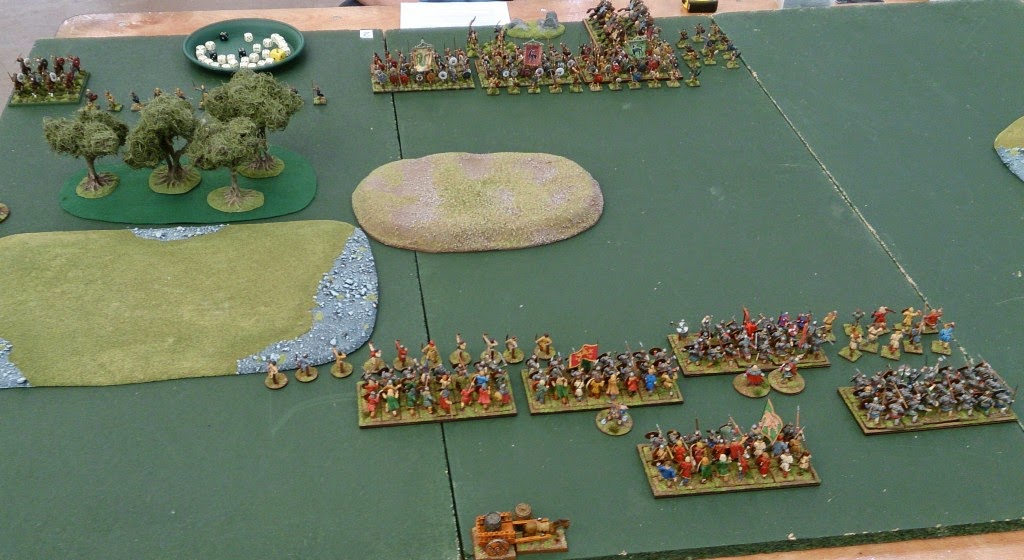 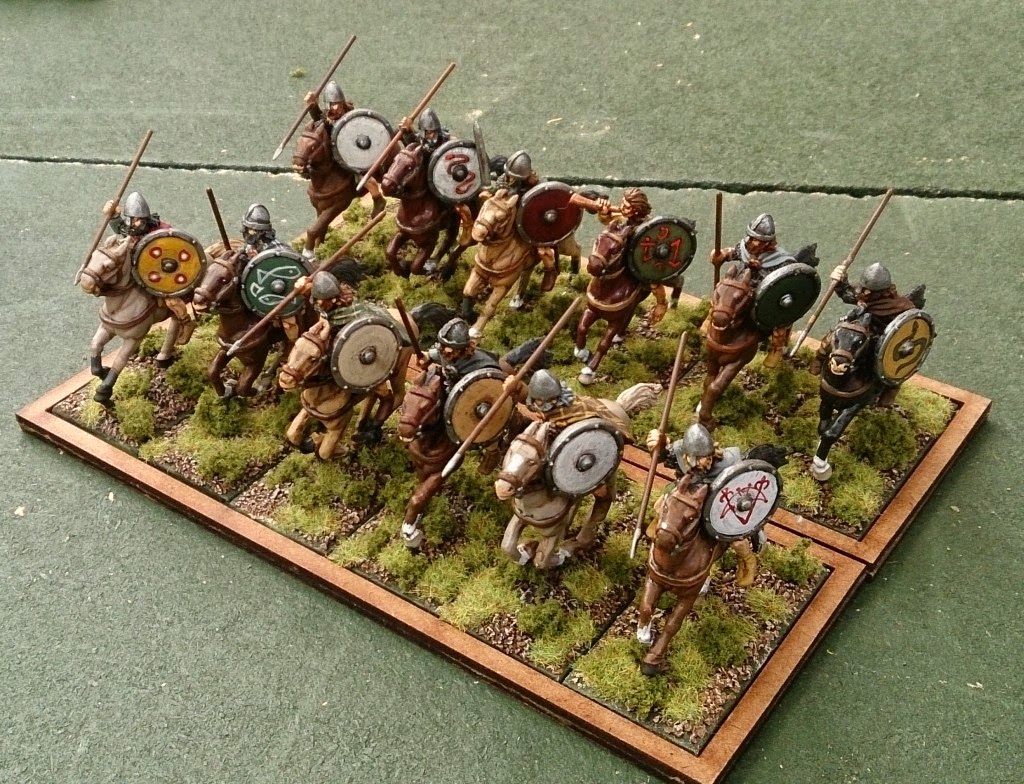 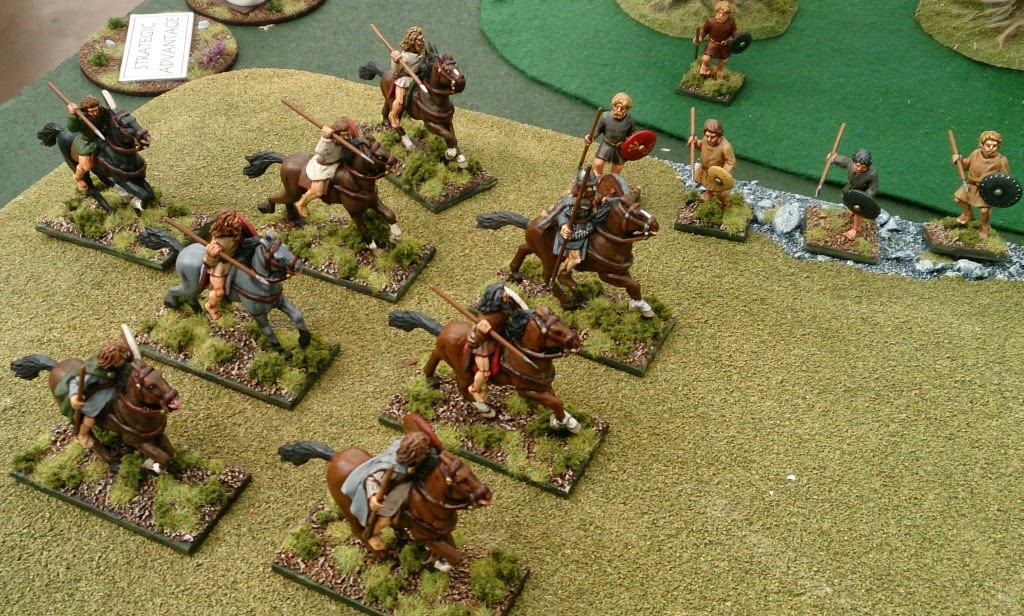 Now I must admit to rather fluffing up my deployment which left me on the back foot from the outset. Alan was able to exploit this, especially with the large number of skirmishers in his army. The hill became a Saxon graveyard. So a solid victory for Alan.

Sadly, these two defeats left me at the bottom of the table :’( ... Well, I suppose I can always do better at the next event!? Many thanks to my two splendid opponents for two good games.

The show itself seemed to be fairly subdued in terms of numbers of people attending. I chatted with a few of the traders around the hall and it seemed like most had a rather quiet day. Holding a show on a Public Holiday weekend is a bit of a double edged sword, particularly if the weather is good (as it was in the South West). Anyway, here’s a few pics of a couple of the tables that caught my interest. 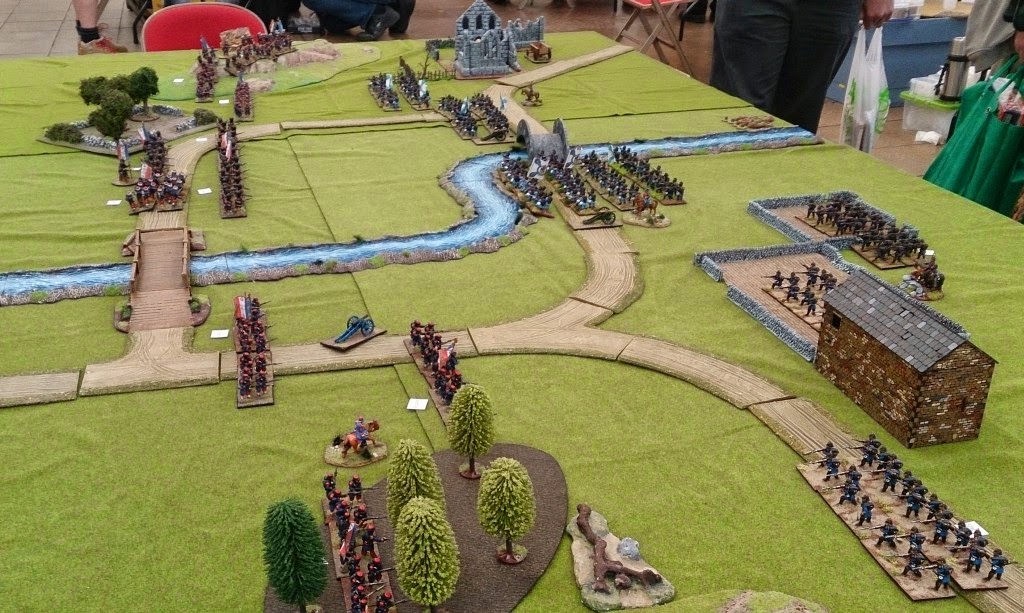 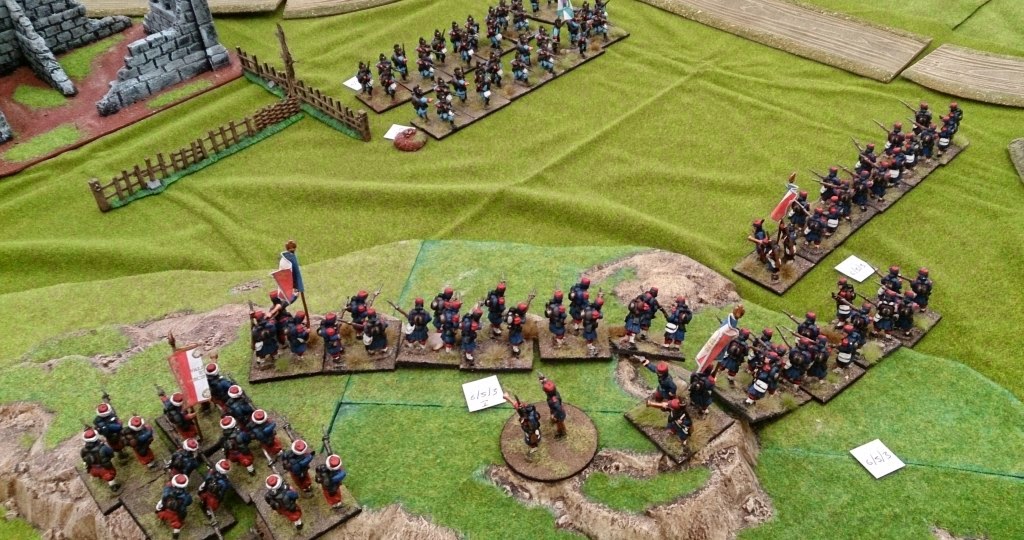 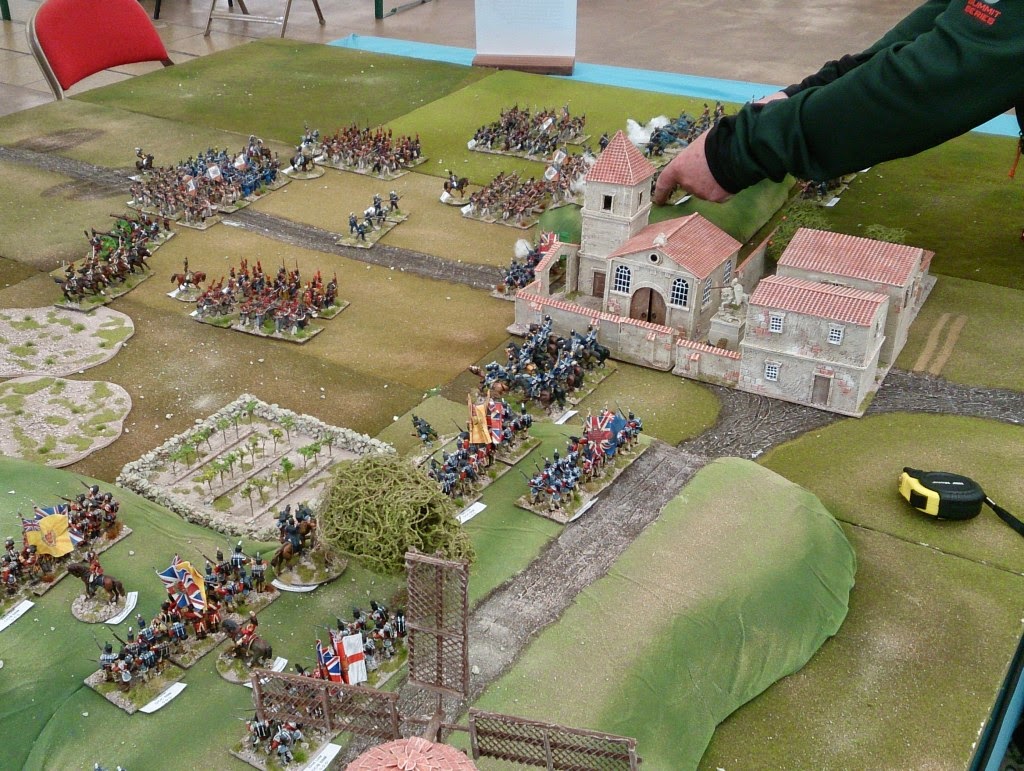 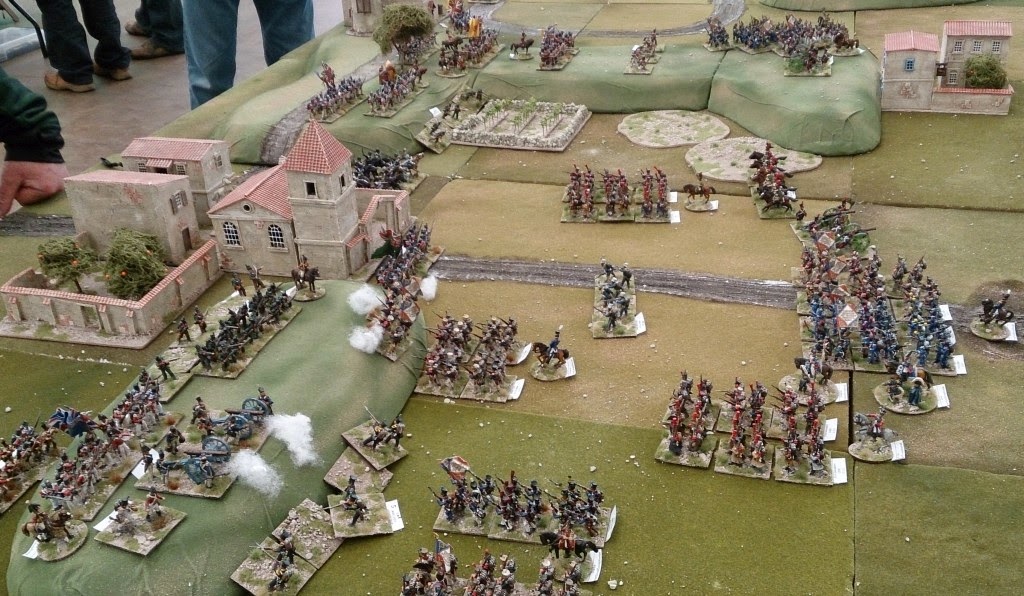 More pics can be found on the Scarab Forum here. These events are always jolly god fun so why not join us at the next one in Devizes.

There is parking outside the club and lunch is provided in the entry price.

Please arrive around 9am, the first game will start circa 9.30am.

Army size: 4000 points.
Armies should be selected from the Scarab website online army organisation lists. You may include up to 500 points of Legends of War within the 4000 points.

We hope to fit players into groups with a theme, which are as follows-
But we’ll try and accommodate any army you bring along.

If you have not yet confirmed your attendance or army preference, please let Phil know as soon as possible.

Questions?
Please get in contact with us via email at philturner@talktalk.net or telephone 07794908204.
If you cannot make the event or are delayed on the day, please let us know.

We look forward to seeing you on the day and enjoying a few games of War & Conquest together.